Hemp, close cousin of pot, could soon be legal across U.S. under latest farm bill 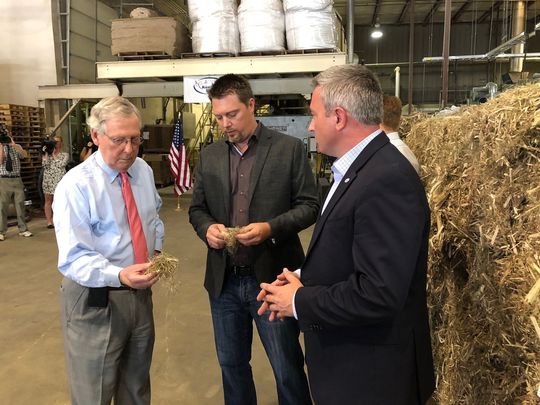 Oregon’s contingent of hemp farmers could soon find it easier to work with banks and university extension offices as two unlikely allies on Capitol Hill ramp up efforts to legalize the close cousin of marijuana.

With a bill before Congress, Sen. Ron Wyden, D-Oregon, and Senate Majority Leader Mitch McConnell, R-Kentucky, hope to pull hemp from a federal list of controlled substances, a move aimed at opening a lucrative market dominated by foreign farmers to more U.S. growers.

Oregon already has a robust hemp industry that boasts almost 500 growers in the 2018 calendar year, including a combined 45 in Marion and Polk counties, according to state data. But that doesn’t mean they’re treated like farmers growing classic Oregon cherries or Christmas trees.

Because hemp remains federally illegal, banks generally shy away from growers, as do federally-funded university extension offices whose officials may otherwise be able to identify pests threatening the crops, saide Sunny Jones, the Oregon Department of Agriculture’s cannabis policy coordinator.

Meanwhile, nearly 150 handlers are registered to transform raw hemp into something marketable like cannabidiol (CBD) extract. Hemp has only minuscule amounts of psychoactive compound tetrahydrocannabinol, commonly known as THC.
Shoppers can find hemp in any number of products, from shampoos to hoodies to snacks. Farmers in Oregon primarily grow hemp for CBD production, Jones said. The state doesn’t produce hemp fiber, for instance, as that requires specialized equipment that’s just not available here yet.

Retailers across Oregon can sell hemp products as long as their THC concentration is 0.3 percent or lower. But things can still get dicey if hemp growers try to move their product across state lines. “That is questionable, because then you have federal regulations that come into play,” Jones said.

In 2014, lawmakers laid the groundwork for states to create programs for hemp cultivation. Provisions introduced under Wyden’s and McConnell’s Hemp Farming Act of 2018 would further loosen federal restrictions, classifying hemp as an agricultural commodity and handing states the power to regulate production.

In addition, the provisions would allow hemp farmers to procure crop insurance and let researchers apply for U.S. Department of Agriculture grants.

When McConnell asked Wyden what he thought about including the provisions in this year’s farm bill, he replied: “I feel like I’ve been shot in the tailbone with good luck.”
“The majority leader wants to put our bill in the farm bill? You know that’s going to become law,” Wyden said in a recent interview.

Both the House and the Senate passed versions of the farm bill last month, but only the Senate version includes the hemp provisions. Lawmakers plan to meet in the coming weeks to work out the differences in the legislation.
In floor remarks on the day senators passed the bill, McConnell blamed American farmers’ inability to meet demand for the crop on “outdated federal regulations that do not sufficiently distinguish this industrial crop from its illicit cousin.”
“It’s left consumers with little choice but to buy imported hemp products from foreign-produced hemp,” McConnell said.

Wyden said farmers in Canada and China “must laugh all the way to the bank.”

The bill would ease the way for farmers to capitalize on a retail market that’s valued at $688 million, according to estimates released last year by Hemp Business Journal and advocates with Vote Hemp.
That market, which includes household products such as food, personal care products and supplements, is expected to breach $1.8 billion in sales in 2020.