New Jersey mayors push for marijuana convictions to be erased 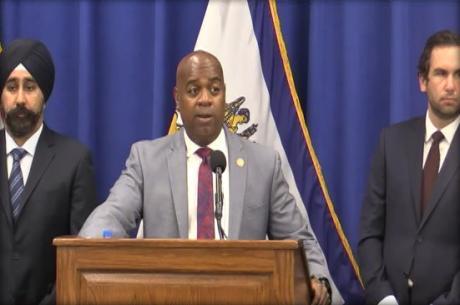 Jersey City Mayor Steven Fulop and Newark Mayor Ras Baraka asked for anyone convinced of possession or distribution of marijuana to be able to have their records expunged and for anyone incarcerated for those crimes be released. The mayors also asked those who have been convicted of any marijuana distribution or possession still be eligible to get a license to sell the drug if it is legalized. They also asked that social impact zones be set up to benefit areas that have been damaged by marijuana prohibition.

The mayors want local municipalities to decide how many licenses should be allowed in their community and where businesses and buildings pertaining to marijuana should be located.

“You need concrete steps included in that bill to make sure that this is sincere, done properly, in correcting what has been done in the past,” Fulop said.

“It just makes no sense that we would allow people to make millions of dollars off of cannabis while others are languishing in jail because of this very thing,” Baraka said. “We’re not legalizing it simply to create another market to make money; we are legalizing it because our communities have been targeted unfairly and whole families and communities have been destroyed around it.”

The mayors said if these requests aren’t met, they will not be supportive of marijuana legislation.