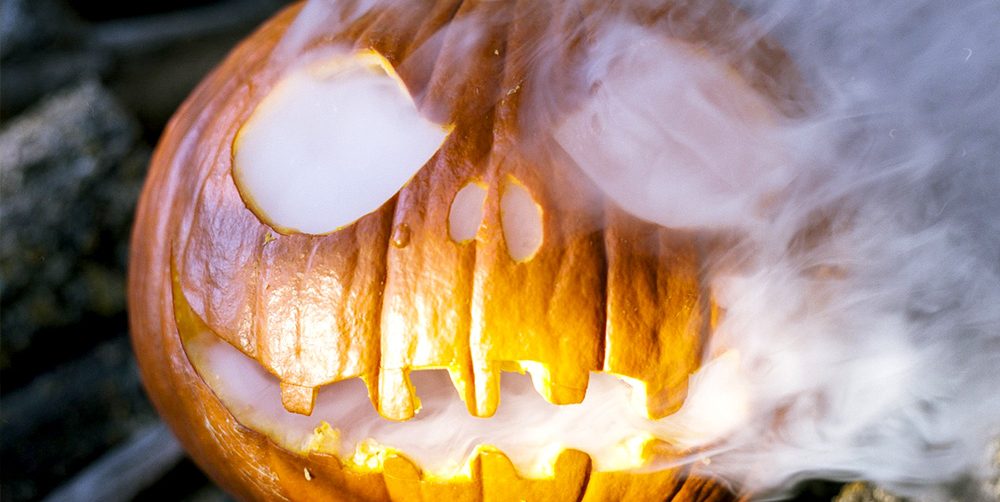 Tonight, on All Hallows Eve, more people than ever in the United States will have access to legal cannabis. Despite a lack of proper public consumption laws from coast to coast, we suspect that ghouls, goblins and plenty of cannabis creatures alike will still be sparking up under the moonlight.

This year’s list of Halloween cannabis strains includes pairings with some of the most haunted landmarks across the nation because we know that nothing makes the season’s scary experiences even more fun than some of the finest marijuana in the land. Here are this year’s strain recommendations for Halloween, matched with their perfect haunted experience.

Right down the road from one of the spookiest boats in the Navy, you can score yourself some of the finest cannabis in California. Regularly seen on awards list across the state, Fig Farms is an absolute A-List cultivator. And surely you’ll need that great purple in your system already when you get on board the USS Hornet to help the hairs on the back of your neck relax. Some say the most haunted part of the ship is the brig, where a Japanese kamikaze pilot committed suicide. The Hornet also picked up Apollo 11 when it dropped in the ocean, so technically the highest people in history first set foot on Earth again aboard the Hornet.

Philadelphia won a Super Bowl this year and its first dispensary opened up shop not long after, so things are going pretty alright in the City of Brotherly Love. But one thing they’ve had for quite some time is one of the most said-to-be-haunted prisons in America: Eastern State Penitentiary. For nearly 150 years, Eastern State Penitentiary housed some of the least affectionate people Philadelphia had to offer. These days, it’s only a 15-minute drive to Restore Integrative Wellness Center, the city’s first pot shop. We recommend the Grapefruit Durban. It’s the strongest thing on the menu and sure to activate your sixth sense.

What would you do if your family invented the rifle that tamed the Wild West and you’re worried all those lost souls coming back to haunt you? Well, if you’re Sarah Winchester, you keep those ghosts guessing with continuous construction on your house. If you’re attempting to explore all 24,000-square-feet of the Winchester mansion, you’re going to need the proper supplies, and for this, we recommend Airfield Supply Co’s Dosidos. After a few tokes on that, you should have no problem deciding which of the 47 fireplaces is your favorite!

Remember back in 1692 when they tried to press Giles Corey like they were making rosin? Yup, the Salem Witch Trials and America’s quick dive into occult persecution were pretty wild, but it’s worth noting that, in fact, no witches were actually burned at the stake in Salem. If you’re touring these haunted grounds, you might want to burn some Amnesia Haze to forget the atrocities of the past! The high impact strain is located at the Alternative Therapies Group’s dispensary, within walking distance to Proctor’s Ledge, the site where everyone else besides Corey was executed for witchcraft.

With rumored ghosts of people like Marilyn Monroe, you’ll be hobnobbing with dead A-listers in no time at the Roosevelt Hotel! Since you don’t know who you might run into, we recommend you take the quick trip to Los Angeles’ Herbarium storefront for some Satellite OG from Satellite Supply Co. The Satellite OG is a solid OG Kush in an OG Kush town. It will surely be competitive with the finer nugs Hollywood has to offer and may even land you a walk-on role in the next Casper movie.

TELL US, what spooky strains are you smoking this Halloween?