Ranked: Here's How Much Your State Will Spend on Recreational Cannabis in 2019 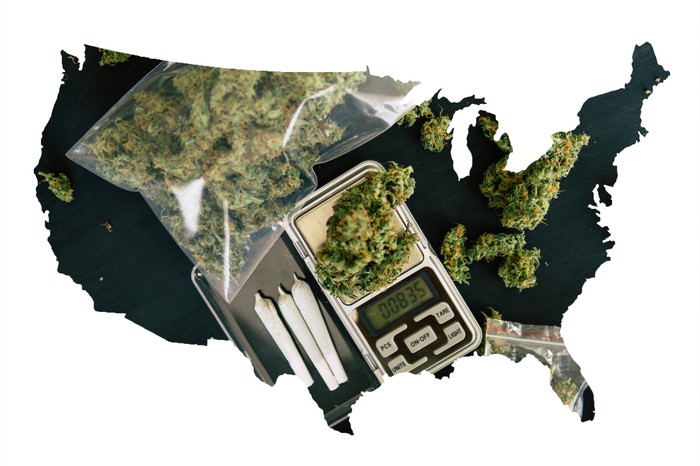 Perhaps it’s appropriate that marijuana is green, because the “green rush” is rapidly turning into a big-money business. Last year, according to the newest State of the Legal Cannabis Markets report from Arcview Market Research and BDS Analytics, licensed-store sales topped $10 billion globally for the first time in history, and worldwide revenue for licensed sales could grow at slightly more than 24% a year through 2024.

But even though cannabis is thriving in more countries than ever, it’s the United States that is perched atop all others. Although estimates vary wildly, it’s believed that the U.S could represent anywhere from a third to up to three-quarters of total licensed-store marijuana spending each year. That makes it the market investors should really be eyeing.

Which states will sell the most recreational marijuana in 2019?

Thankfully, Arcview and BDS have done the legwork for investors and laid out projections on medical and recreational sales for nearly all 50 states, save for a few that have virtually no shot of legalization (medically or recreationally) by 2024. Since the adult-use market is projected to dwarf medical marijuana sales within the next couple of years, today we’re going to look at where your state ranks in estimated recreational pot spending for 2019, if it allows it.

As you may be aware, the federal government has remained steadfast on its classification of cannabis as a Schedule I drug. This means it’s wholly illicit, prone to abuse, and has no recognized medical benefits. In other words, if recreational weed is to be legalized, it has to be done on a state-by-state basis. As of this past weekend, 11 states had passed laws via ballot or legislative initiative to legalize adult-use marijuana. In alphabetical order, they are:

Don’t see your state on this list? Well, that makes estimating its recreational marijuana spending in 2019 very simple: $0.

But even some of the states listed above will have $0 in adult-use marijuana sales for 2019. For example, Illinois only signed its adult-use cannabis bill into law a few weeks ago, with sales not beginning until Jan. 1, 2020. Also, despite legalizing adult use in 2018, Michigan won’t see its first sales until after Illinois in 2020. That means nothing in recreational weed revenue this year for either state.

Likewise, although Vermont’s legislature legalized adult-use marijuana, retail sales of the drug are not permitted. However, regulations for adult-use sales are expected to be set soon, which will allow recreational sales to commence sometime in 2020.

Ranked: Here’s How Much Your State Will Spend on Recreational Cannabis in 2019
cannabis opportunities