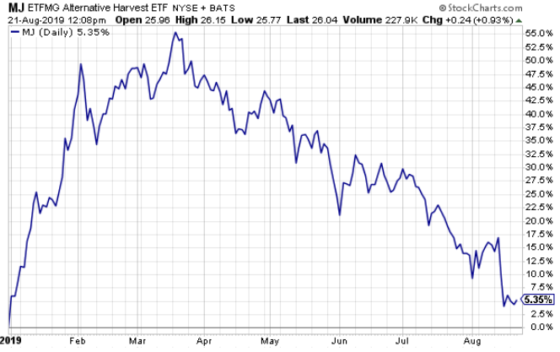 Why we’re closer than ever to federal marijuana legalization

Full federal marijuana legalization … before the end of the year?

Odds are you missed it, but this past Sunday, there was an important interview with Rep. Earl Blumenauer (D-OR) on a local Portland TV station … and it has big implications for marijuana investors.

You might recognize Blumenauer’s name. He’s perhaps the most outspoken advocate for marijuana reform in Congress. Last fall, he laid out a step-by-step plan called the “Blueprint to Legalize Marijuana.” It detailed a pathway to ending the federal marijuana prohibition by the end of this year.

“Congress is out of step with the American people and the states on cannabis,” he wrote to House Democratic Leadership. “There’s no question: cannabis prohibition will end. Democrats should lead the way.”

On Sunday, Blumenauer said that federal legalization is absolutely a possibility in 2019.

That might surprise you. Advances toward federal marijuana legalization seem to have slipped into the background as the headlines have been filled with the urgency of yield curves, trade wars, and threats of recession. But that just makes the investment potential in marijuana all the greater.

Stepping back, regular Digest readers know that we’re incredibly bullish on the legal marijuana trend. That’s because it’s less of a “trend” in the traditional sense, and more of a seismic cultural-shift that’s reshaping society and creating a trillion-dollar investment opportunity.

Now, as we’ve noted here in the Digest, the marijuana sector has pulled back in recent months, creating great buying opportunities in select stocks that could be tomorrow’s market leaders. This pullback, combined with marijuana’s temporary respite from the media spotlight means you and I can buy into great companies at discounted prices before federal legalization happens … which will usher in a new era of investment-grade capital bolstering the marijuana sector.

If Blumenauer is right, and federal legalization does happen in 2019, then we need to take advantage of this buying opportunity now … but do so wisely.

So, let’s look at what Blumenauer said in this latest interview, then discuss how to position ourselves today for the potential legalization of tomorrow.

”We’ve got things keyed up. I think there’s a great chance of doing it this congress — maybe even this fall” — Earl Blumenauer

The segment of the interview focused on marijuana began with a question from the host:

You wrote that, “by the end of 2019, marijuana will be legal at the federal level.” We got about four, five months left here? How we doing?

Well, we are in really great shape. We’ve had a number of votes in the House. The things I’ve put in the Blueprint are moving forward … We’ve had the most comprehensive piece of legislation come out of the Judiciary Committee. And the banking legislation came out of Financial Services.

So, we’ve got things keyed-up. I think there’s a great chance of doing it this congress. Maybe even this fall …

But the issues dealing with cannabis are on the right track. We can get it wrapped up this congress. Maybe even this year.

As we’ve been saying for months here in the Digest, when federal reform legislation is passed, it’s going to be a watershed moment for the marijuana investment market, leading to massive gains in a compressed period.

That’s because big-money institutional investors and pensions that have been hesitant to invest based on marijuana’s illegal status will no longer feel limited. Legalization will usher in a second wave of investment gains.

Matt McCall is InvestorPlace’s resident marijuana expert. While a great many other analysts are just now jumping on the marijuana bandwagon, Matt has been a leader in the space since 2014. He recently highlighted the impact of legalization the following way to his subscribers:

U.S. legalization will be the biggest catalyst in the history of the marijuana industry. The day the U.S. government passes a legalization plan on the federal level will be a defining moment that will mark the next era in marijuana investing.