Marijuana industry poised for supercharged growth thanks to President Trump 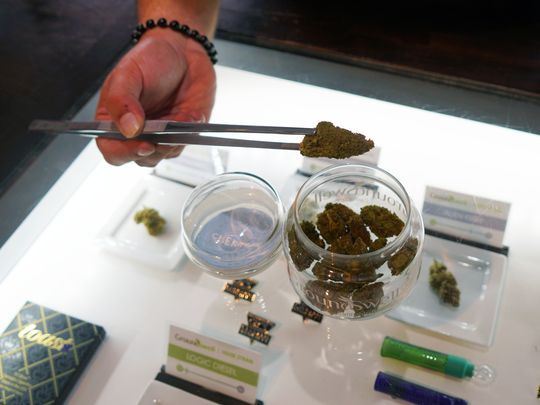 DENVER — America’s fast-growing marijuana industry appears poised for supercharged growth after winning what cannabis entrepreneurs see as approval from the Trump administration to forge ahead.

The legal marijuana market was already growing exponentially despite fears of a federal crackdown under Trump and Attorney General Jeff Sessions, but Trump’s signal that he’ll respect state legalization may swing open the floodgates by reassuring traditional investors, entrepreneurs and local lawmakers that it’s OK to jump in.

Across the nation, risk-takers have poured billions of dollars into the industry while knowing they could be arrested by federal agents at any moment.
They’ve built — largely unseen — a powerful network of businesses poised to take advantage of a more favorable federal climate. That industry has already woven itself into the fabric of the states where pot is legal, providing tens of thousands of jobs and generating billions of dollars in new tax revenues.

Experts say those numbers are now likely to rise rapidly thanks to Trump’s promised hands-off approach and support of some sort of federal solution.
“Every day we wake up and build this industry. And every day we do that, it’s a little harder to shut it down,” said Daniel Yi, a spokesman for the California-based marijuana powerhouse MedMen.

There’s no denying America’s love affair with marijuana is accelerating across the nation as voters loosen laws and grow increasingly comfortable with a drug that has been forbidden for generations. Today, more than 60% of Americans believe marijuana should be legal, double its popularity in 2000, according to a January 2018 poll by the Pew Research Center. That comes against a backdrop of contrasting studies that have offered little insight into how legalization is impacting youth use, stoned driving and border-state black markets.

But Trump’s acceptance of popular state legalization reflects the reality and power of this increasingly important industry. Across the country, cannabis legalization is transforming communities in ways big and small, winning many converts among skeptical cops and local politicians as new tax dollars pour into schools and scholarships, pay for road paving and drug treatment, and, if advocates have their way, lift up minority communities devastated by the War on Drugs.
“It’s really fun to see people’s minds change,” Jen Lujan of California-based marijuana firm Eaze said.

Marijuana’s economic impact in particular has helped keep the focus on the positives of legalization. While most supporters agree that marijuana taxes haven’t been the boon many expected, the industry’s economic power is undeniable.
At least 121,000 people are already working directly in the nation’s home-grown marijuana industry, tending plants, trimming leaves and selling cannabis products to eager consumers, according to BDS Analytics and Arcview Market Research. For comparison, there are fewer than 50,000 coal miners, according to the federal Bureau of Labor Statistics.

Nine states — Alaska, California, Colorado, Oregon, Massachusetts, Maine, Nevada, Vermont and Washington, along with Washington D.C., — have legalized recreational pot use, although not all of them permit and tax sales. Those states selling pot have collected more than $1.6 billion in taxes since their legalization programs began, and California’s launch of legal sales earlier this year is expected to supercharge that number.

Medical and recreational cannabis sales will hit $11.7 billion this year, predicts cannabis analytics firm New Frontier Data, increase by 25% in 2019 and hit $25 billion in seven years. For comparison, wine sales in the United States were worth $60 billion last year, according to the Beverage Information and Insights Group. For risk-taking entrepreneurs, cannabis holds the promise of a vast new industry that’s entirely homegrown.

How the federal government acts could change that dramatically. President Obama’s administration had promised it would leave well-run state marijuana programs alone, but Sessions rescinded that promise in January, throwing the industry into chaos. Many traditional investors have shied away from pouring their capital into the industry over fears they’d be treated like drug traffickers, and a strong sign of support from Trump over Congressional action might provide the reassurance they’re seeking.

Last week, U.S. Sen. Cory Garder said Trump promised him he’d respect states’ rights when it comes to legal pot and would support a federal-level change to bring consistency. Several members of Congress have introduced bills to either legalize cannabis entirely or at least remove it as a Schedule 1 controlled substance.
“By supporting this law, President Trump has arguably done more to advance the growth of the regulated cannabis industry than any other president,” said Isaac Dietrich, CEO of marijuana services firm MassRoots.

Because legalization has happened almost entirely at state ballot boxes, the United States has so far avoided having a national conversation about the broader implications of increased use and availability. That troubles legalization opponents such as Kevin Sabet of Smart Approaches to Marijuana, the nation’s leading anti-cannabis organization. SAM has been fighting a state-by-state battle against legalization on the grounds that increased access will lead to increased use. SAM supports increased access to drug treatment and a reduction or elimination of criminal penalties for minor marijuana consumption but opposes broad legalization.

“This reckless plan will not go unanswered,” Sabet said.
Whether there really is a plan remains uncertain, and many marijuana industry experts say they’ll believe Trump only once there’s a law in place. In dealing with a president who sets policy via Twitter, they want to see actual legislation.

“This is another head-spinning moment,” said Oregon Congressman Earl Blumenauer, a Democrat and leading voice for federal legalization. “We should hope for the best, but not take anything for granted. Trump changes his mind constantly, and Republican leadership is still in our way.”

A USA TODAY survey in January found hundreds of thousands of dollars flowing from the cannabis industry into campaign finance accounts of both lawmakers and political action committees, with emphasis this year on Congressional Republicans who control the agenda.  Democrats typically have been the largest recipients of marijuana campaign money in the past, but Republicans are now taking the lead in accepting those donations, according to the Center for Responsive Politics, which analyzed contributions at the request of USA TODAY. Experts say the recent shift is largely attributable to the belief by marijuana businesses that Republicans who support states’ rights are their best allies today.

But in the industry’s increasing clout, legalization critics see echoes of a time when Big Tobacco called the shots. Critics see worrying similarities in how the marijuana industry makes broad health claims about its products while simultaneously touting its economic impact. Cigarette manufacturers made similar claims, and the health costs of tobacco use, including lung cancer, are widely acknowledged to dwarf the industry’s benefits.

“Tobacco Road also hired a lot of people and kept a lot of people employed,” said Deni Carise, an addiction expert and chief scientific officer at Recovery Centers of America. “I think (marijuana legalization) is going to cost our country a lot of money.”
Adds Sabet: “It’s one thing to let someone grow a little pot at home. It’s another entirely to get Madison Avenue involved. This isn’t something that Cheech and Chong would have ever envisioned. The people in suits have taken over.”

Legalization supporters brush off those concerns, arguing that the War on Drugs for too long has demonized a plant widely used by humans for thousands of years. They say it’s about time national politicians recognize that marijuana legalization is the right thing to do. And they say if the nation’s economy can benefit, all the better.

“Now, finally seeing that momentum, seeing that shift, it’s pretty amazing. And it’s happening quickly, quicker than maybe even the regulators are ready for. I don’t think anybody realized how big this industry really is,” said Dennis Hunter, founder of California-based premium marijuana supplier CannaCraft. “Everybody’s aware of it right now, but it’s getting normalized, and in a couple years we’ll all just accept it.”