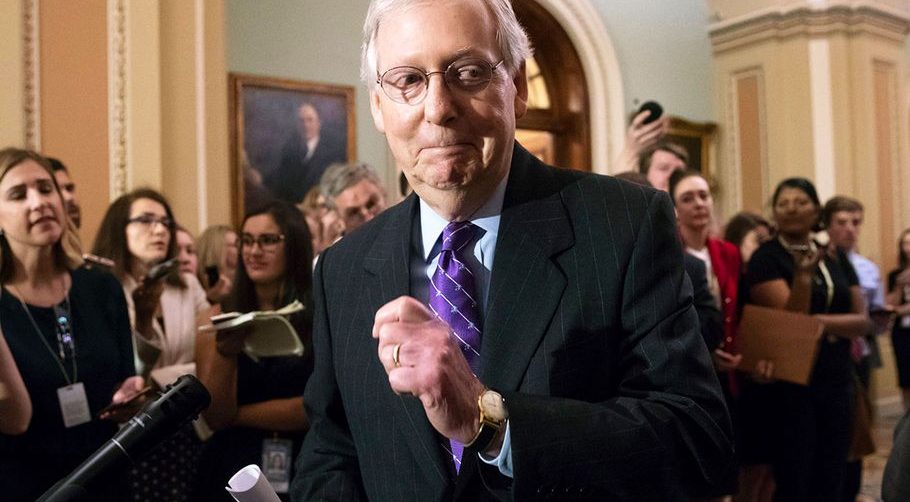 Yesterday, the Senate passed a version of the 2018 Farm Bill that would legalize so-called “industrial hemp” – legislation that has long been a pet project of one of the most powerful men in America, Senate Majority Leader Mitch McConnell (R-KY). His office immediately issued a self-congratulatory press release about the sanctity of the American farmer and the enormous economic opportunity that will soon be available to former tobacco growers in his home state of Kentucky. These are the talking points McConnell has been pushing since the beginning of the year: that hemp is “a completely different plant than its illicit cousin,” marijuana, and that Americans are clamoring for more hemp products, spending $820 million last year on “everything from clothing to auto parts,” mostly made out of hemp grown overseas.

But hemp and marijuana are not actually different plants, and some experts say that McConnell’s desire to legalize hemp is not really about hippie rope necklaces and home insulation. It’s about a drug – a compound with such immense medical potential that the FDA just approved a pharmaceutical-grade version for children suffering from intractable seizures. We are talking, of course, about cannabidiol, or CBD.
Ever since Sanjay Gupta showcased the healing powers of CBD in his August 2013 CNN special Weed, America has been obsessed with the stuff. For the uninitiated, CBD is a cannabis compound that doesn’t really get you “high,” as THC does. Instead, CBD has a calming, anti-inflammatory effect that advocates and salespeople claim can do everything from reduce anxiety to kill cancer cells. At health food stores and marijuana dispensaries across the country, you can now find CBD lotions and CBD capsules and CBD beard balms and, yes, even smokeable cannabis that is high in CBD.

But CBD’s legality is complicated, to say the least. Without getting into the mind-numbing specifics, let’s just say that reasonable people disagree about whether it is possible for any CBD to be legal, and shops selling CBD products in states like Indiana and Tennessee have been raided by local law enforcement. So in order for mainstream retailers to feel comfortable carrying CBD products and Kentucky’s farmers to subsequently cash in on the CBD craze, McConnell put together legislation making it official. Though he’s focused his hemp legalization rhetoric on helping farmers and bland-sounding industrial products, his true intentions became abundantly clear about two weeks ago, when Sen. Chuck Grassley (R-IA) proposed an amendment that would exclude CBD and other major compounds (called cannabinoids) from the definition of legal hemp.

McConnell shot the proposal down, saying, “I’ve declined to include suggestions that would undercut the essential premise of the bill, namely that hemp and its derivatives should be a legal agricultural commodity.”

At no point did he refer directly to the “derivative” that was up for discussion. But anyone paying close attention understood what he was talking about.

“McConnell’s omission of CBD is not a denial of it. It’s simply a tactical political move,” says Carl Cameron, a former Fox News commentator who now works for New Frontier Data, a D.C.-based firm that provides information on the cannabis industry to investors. “He’s trying to help potential supporters avoid criticism in places where opposition to marijuana might be misconstrued and then undermine support for hemp.”

Leslie Bocksor, who runs the cannabis consulting firm Electrum Partners, agrees that McConnell has downplayed the fact that CBD is a primary motivation for legalizing hemp so as to fly below the radar of anti-pot donors and voters.

“This is just a way for McConnell to be able to move this forward without taking the political risk in talking about what’s going on, which is, yes, CBD is in so much demand that the supply can’t possibly equal the demand any time in the foreseeable future,” Bocksor says. “This is part of the Kabuki theater of the political environment we’re in today.”

Bocksor himself has embraced this kind of winking reference – hemp as a euphemism for CBD – as a business strategy. For the past few years, he’s been advising the companies he works with to avoid mentioning CBD directly or making any medical claims about what the product can do in order to avoid interference from law enforcement or warning letters from the federal government. Label everything as “hemp extract,” Bocksor says, and the consumer will know you mean CBD, as well as what kinds of health benefits can be expected.

Culturally, hemp has long been seen as a taller and more fibrous cannabis plant than marijuana, but the legal distinction is based only on THC content. Once CBD started to enter the mainstream consciousness about five years ago, pot farmers in states like Colorado and California began to breed strains of cannabis that were high in CBD but contained so little THC that they could be reclassified as “hemp.” Around the same time, the 2014 Farm Bill created a pilot program where state departments of agriculture and universities could register farmers to grow “hemp” — meaning, cannabis that was less than 0.3 percent THC.

McConnell’s home state of Kentucky is the second biggest producer of hemp under this program – behind only Colorado. And while most people believe that the hemp pilot program in the 2014 Farm Bill was not created with the intention of causing a boom in CBD products, that is exactly what happened.

“Almost all of the hemp growers in Kentucky are doing so for CBD production right now, and I know that because we either represent them, or we’ve been to the farms to see what they’re doing,” says Colorado-based cannabis attorney Bob Hoban, who recently argued in federal court on behalf of the Hemp Industries Association. “Cannabinoids are the cash product that comes out of hemp.”

So even if he doesn’t want to say so outright, McConnell’s desire to allow more American farmers to legally grow hemp is rooted in the popularity of CBD. This is a significant turning point in cannabis politics: one of the most powerful Republicans in the country is pushing for the legalization of a major compound found in marijuana. And in 2018, this isn’t that surprising. Red states like Oklahoma and Arkansas have voted to legalize medical use, and prominent GOP leaders like John Boehner and Orrin Hatch have publicly reversed course, supporting legal weed after decades of supporting prohibition. A recent Center for American Progress poll showed that a majority of Republicans now support the full legalization of the cannabis plant. Still, other polls have shown that support for pot among the evangelical base remains low, and a few major conservative donors – including casino magnate Sheldon Adelson – remain staunchly anti-cannabis.

For now, the legal status of CBD is still murky. But with McConnell’s support, there is a good chance that the House’s version of the Farm Bill will include a provision to legalize hemp-derived CBD, and potentially open the door a world where you can find CBD soaps and CBD tinctures on the shelves at Target and CVS. Many entrepreneurs are already bracing themselves for the change.

“Everybody knows on the corporate side that this Farm Bill is it. It’s gonna go through,” says Dan Goldfarb, whose Canna-Pet hemp CBD products can be found at thousands of independent pet stores and veterinarian offices nationwide. “But nobody’s been stopped from actually making these products in the interim. It’s simply a chilling effect. I like the chilling effect, because it keeps away corporate scumbags.”