5 Wacky Weed Laws in States That Have Legalized Marijuana 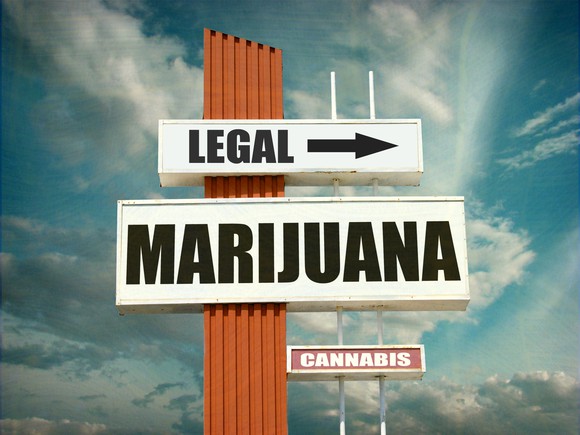 Thirty U.S. states plus the District of Columbia have legalized medical and/or recreational marijuana, with Oklahoma becoming the latest to do so just a few weeks ago. However, legalization means different things in different locations.

The sixth edition of The State of Legal Marijuana Markets recently released by ArcView Research and BDS Analytics listed some unusual restrictions on legal marijuana in some states. Here are five wacky weed laws in states that have legalized marijuana — and what they reveal about the status of the U.S. cannabis industry.

Marijuana growers and retailers have to be careful how they transport cannabis products in the state. California doesn’t allow the use of aircraft, boats, rail, human-powered vehicles (such as bicycles), or unmanned vehicles (including drones) to move marijuana-related products from one location to another.

2. Connecticut: Cut the lights
Connecticut legalized the use of medical marijuana in 2012. A bill to also legalize the recreational use of marijuana was introduced in the Connecticut state legislature but failed to gain enough traction.

3. Delaware: Advertise like it’s going out of style
Delaware legalized the use of medical marijuana in 2011. The state’s House of Representatives recently voted 21-15, with five members not voting to also allow recreational marijuana in Delaware. However, the effort still failed because a three-fifths majority is needed in the state to pass legislation involving taxes and fees.

4. Nevada: Three fonts and you’re out
Nevada is a state where nearly anything goes. The Silver State is famous for its legalized gambling. It allows legalized prostitution in certain locations. Nevada also allows the legal use of both medical and recreational marijuana.

While you will see signs of nearly every variety in front of Nevada’s casinos, that isn’t the case for its marijuana dispensaries. Signs for these businesses are restricted to using just two fonts at most on signage. And Nevada officially prefers sans serif fonts, by the way.

5. Washington, D.C.: Capital offenses
OK, technically Washington, D.C. isn’t a state. But the nation’s capital does allow the legal use of both medical and recreational marijuana. There are a couple of strange twists to both, though.

Medical marijuana in D.C. can’t be sold anywhere where gasoline is also sold, nor at any location where automobiles are repaired. The former makes sense in trying to prevent using cannabis and driving, but the latter restriction is interesting, to say the least.

As for recreational marijuana, it’s totally legal. You just can’t buy or sell marijuana for recreational purposes in D.C. Giving it away is OK, though, so some businesses have come up with clever ways to sell one non-cannabis product while “giving away” marijuana with it.

Reading between the lines
The fine print in state marijuana laws might seem silly. However, they underscore a serious point that investors in particular should understand: The U.S. marijuana industry has a long way to go before it’s fully accepted — even in states that legalize marijuana.

It’s easy to only focus on the explosive growth in the industry. And it probably will be explosive. Total marijuana sales in the U.S. could soar to $22 billion by 2022, according to the 2018 edition of the Marijuana Business Factbook. ArcView Research and BDS Analytics project that total U.S. marijuana spending will be closer to $23.4 billion four years from now. But this rapid expansion of the U.S. cannabis market won’t come easily, as hinted at by the strange restrictions in states that have already legalized medical or recreational marijuana.

How should investors react to this lack of full acceptance of the cannabis industry? You could stay away completely, as my colleague Sean Williams recommended in a recent discussion that he and I had on investing in marijuana stocks. Or you could invest, but do so very cautiously.

My view is that Scotts Miracle-Gro (NYSE:SMG) continues to be one of the best ways to cautiously invest in marijuana. The company has aggressively made acquisitions to build up its hydroponics business, which caters to marijuana growers. Scotts is definitely positioned to benefit from growth in the U.S. cannabis industry.

At the same time, though, the company still makes 90% of its revenue from consumer lawn and garden products. This gives Scotts Miracle-Gro a hedge if it takes longer for the U.S. cannabis industry to become more legitimized.

You can probably count on more weird laws, though. As long as there are wacky politicians, there will be wacky rules.