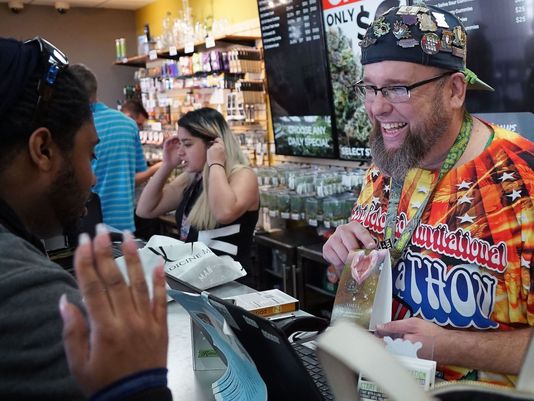 Help wanted: budtenders, cannabis chefs, flavor scientists, extraction technicians.
Those are just a few of the new job categories opening up in the budding legal cannabis industry in more than two dozen states where the drug is legal for medical or recreational use or both. A quick scan of online help-wanted ads shows cannabis companies are seeking a slew of new employees with all skill types, ranging from office managers to accountants to CEOs. But many of the positions posted on job sites such as Indeed.com and Vangsters.com – billed as the cannabis industry’s largest hiring platform – require cannabis-specific skill sets.

Those jobs include “budtenders,” the industry term for salespeople who, like bartenders, greet customers from across the counter at retail dispensaries. In Ohio, for example, 56 licensed dispensaries are looking to hire budtenders to help medical cannabis patients select the best strains to treat each of 21 conditions that qualify for cannabis therapy in the state.

Otherwise known as patient care representatives, budtenders must be able to articulate the characteristics and properties of each strain of cannabis they sell.
While familiarity with the product is essential, stoners need not apply, according to Tom Adams, principal analyst at BDS Analytics, which tracks the cannabis industry.
“In Ohio, you’re basically talking about providing medical services,” Adams said. “Even at the budtender level, cannabis companies are looking for smart people who can learn a lot in a hurry about cannabis’ uses as medicine and can effectively communicate that to their customers.”

Compensation?
Budtenders start at about $12 to $15 an hour, depending on location and experience.
But the job is typically the first step toward becoming dispensary store managers who can earn salaries starting at about $40,000 a year. Budtender pay is comparable to most entry-level employees, including bud trimmers, who manicure cannabis plants by hand to remove excess foliage, and greenhouse workers who maintain the planting area.

In demand: ‘Master growers’
At the higher end of the pay scale, the most lucrative cannabis jobs pay up to $100,000 a year or more, according to a list of the highest-paying jobs in the cannabis industry posted by the online industry magazine Civilized.

Unlike entry-level positions that typically require no formal education or training, the six-figure gigs are typically reserved for those with science and technology degrees.
For example, master extractors who take cannabis plants and turn them into oils and other concentrates allowed for consumption in Ohio and other states are often required to have advanced degrees in biochemistry and engineering.

Perhaps the most sought-after professionals in the legal cannabis industry are head growers who have the experience and training to mass produce cannabis on a commercial scale.

The best grow masters have degrees in horticulture, plant health, or closely related fields, plus years of experience working in the industry. Not only do they earn well over $100,000 a year, on average, they commonly share a percentage of the cultivator’s profits. The green rush for cannabis dollars has also created high-paying jobs for professionals with more creative or artistic dispositions. Chefs, for example, have secured a strong foothold in the medical cannabis industry by making the medicine easier to swallow.

Cannabis chefs infuse edibles such as cakes and candies – even savory dishes like wing sauces and dips – with specific doses of cannabis oils and concentrates that comply with state laws.
They also use their culinary skills to mask the sharp taste of THC – the main mind-altering ingredient in cannabis that gave old-school pot brownies an earthy taste.
The market for cannabis chefs has exploded in recent years, with salaries for both topping out well above six-figures.

Where to get training?
As with most cannabis jobs, however, qualified candidates are hard to find, said Jacob Wagner, dean of student services at the Cleveland School of Cannabis.
“There’s a real lack of skilled labor in the cannabis industry, particularly in emerging markets like Ohio, where people haven’t had a chance to work in the industry before,” Wagner said. “It’s imperative that people go out and get the proper training from us or some other professional program if they want to land a good job in this business.”

The school, which launched in January 2017 in suburban Cleveland, offers a variety of cannabis certificate programs that have been approved by the Ohio Board of Career Colleges and Schools. Prices range from about $6,500 for a single major to $12,500 for the “executive package,” which includes a business component and instruction on how to start your own cannabis business.

BDS estimates the medical cannabis industry in Ohio will generate close to $300 million in annual sales by 2022, and directly employ more than 6,000 workers.
That doesn’t include indirect employment by security firms, transportation companies and others supporting the legal cannabis industry.

Nationwide, the cannabis industry is expected to create more than 400,000 jobs by 2021 and generate $40 billion in annual sales, according to BDS.
But employment in Ohio will be tame compared to states that have legalized marijuana for both medical and recreational use.

For example, Colorado, which was the first state to legalize cannabis for recreational use in 2012, has more than 20,000 workers in the cannabis industry.
They support a medical and recreational cannabis market in which sales totaled more than $742 million in just the first six months of this year, with recreational sales accounting for more than two-thirds of the total, according to state’s department of revenue.

“You won’t see employment (in Ohio) at the level that it is in California or Colorado because the medical side of the market is a lot smaller than recreational,” Adams said. “But there’s still a lot of opportunity in Ohio because you’re talking about establishing a whole new industry.”

Working with cannabis: Five things to know
1. The skills and degrees needed to land cannabis jobs vary. Some require cannabis training and experience working in the industry. Others simply require traditional job skills like accounting and office management.

2. Most jobs are off-limits to people who have drug felonies on their criminal records.

3. Federal labor laws don’t apply to most cannabis enterprises, so employers aren’t required to offer health insurance and benefits unless the state mandates it.

4. Many workers come into direct contact with cannabis plants, which may be a liability if you’re subject to drug testing on another job.

5. You might think you’re shoe-in for a job because of your years of experience growing or selling cannabis on the black market. But job candidates that tout that background could hurt their chances of landing a job in the legal industry.