The C$290 million ($220 million) deal is the latest in an acquisition spree that has seen Aurora buy at least 10 companies in the past two years. Aurora shares gained as much as 4.1 percent, while ICC added 5.6 percent in intraday trading in Toronto.

“We feel a significant sense of urgency to rapidly establish a powerful global footprint,” Cam Battley, chief corporate officer at Aurora, said in a phone interview.

Vancouver-based ICC has more than 70 percent of the market share in Uruguay, which was the first country in the world to legalize recreational cannabis. It also holds Colombian licenses to produce medical marijuana and has an agreement to export cannabidiol products to Mexico. The company’s current and under-construction facilities will bring its production capacity to an estimated 450,000 kilograms (992,000 pounds) per year. 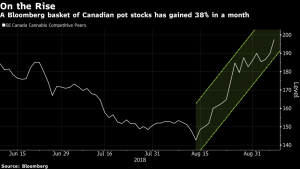 “We see ICC as the jewel of the South American market,” Battley said. “This is going to be our anchor in South America and we have very big plans for that continent.”

The purchase price of C$1.95 per share represents a 34 percent premium to ICC’s 20-day volume-weighted average trading price as of Aug. 22, the day before ICC said it was aware of a Spanish-language media report about a potential acquisition. Aurora will issue approximately 36 million shares in connection with the transaction.

Shareholders representing approximately 29.4 percent of ICC have agreed tender their shares to the offer.