Election 2018: A Complete Guide to Cannabis on the Ballot

Cannabis legalization goes before the voters in a number of states on Nov. 6. This year’s highlights:

Michigan and North Dakota will decide statewide measures on the legalization of adult-use cannabis.
Utah and Missouri will consider medical marijuana legalization initiatives.
Other states will consider smaller reforms or advisory measures, including Ohio and Wisconsin.
Leafly’s political staff will continually update this page with the latest poll numbers, financial contributions, and election data. Follow our campaign features and expanded coverage at Leafly Politics. 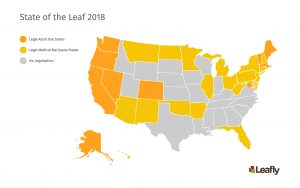 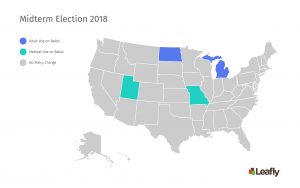 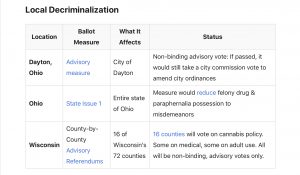 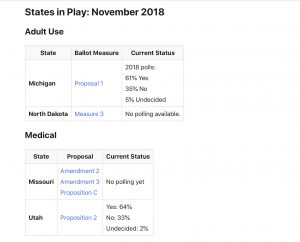 Prop 18-1 would legalize cannabis for adults 21 or older. The measure would allow flower, concentrates, and cannabis-infused edibles, as well as homegrow (up to 12 plants) for personal consumption. Possession limits: 10 ounces of cannabis flower. Local opt-out would be allowed, giving local municipalities the ability to ban or severely restrict cannabis businesses. A 10% cannabis tax would be imposed on retail sales. That revenue would be devoted to regulatory costs, clinical research, schools, roads, and municipalities where cannabis businesses are located.

Who’s backing the initiative: The MI Legalize 2018 campaign includes buy-in from the Coalition To Regulate Marijuana Like Alcohol, Michigan NORML, the ACLU, the Drug Policy Alliance, the Marijuana Policy Project, the marijuana law section of the State Bar Association, and other groups. That amount of unity is unusual for a legalization campaign–and indicative of the organizational power behind the movement in Michigan.

Who’s opposing it: Nobody yet.

Yes, Missouri has three competing measures on the same ballot. That’s the bad news. The good news: It’s pretty easy to differentiate between them. Amendment 2 is the grassroots standard MMJ measure. Amendment 3 and Proposition C are one-off attempts by individuals to pass measures that may or may not benefit them personally.

Amendment 2: This New Approach Missouri effort would amend the Missouri Constitution to legalize, tax, and regulate marijuana for medical purposes. It would:

Use tax revenue for healthcare services for military veterans, and administer the state cannabis regulatory program.
Allow patients to grow their own medical cannabis.
Amendment 3: This effort, led by personal injury lawyer Ben Bradshaw, would amend the Missouri Constitution to legalize, tax, and regulate marijuana for medical purposes. It would:

Use tax revenue to establish and fund a state-run cancer research institute.
Not allow medical patients to grow their own cannabis.
The cancer institute would be chaired by Brad Bradshaw, author of the amendment.
Brad Bradshaw would also select the institute’s governing board.
Proposition C: This measure, written and led by lobbyist Travis H. Brown, would amend Missouri law to allow the growth, sale, and use of marijuana for medical purposes. It would:

The latest: The wild cards in this race are, of course, Brad Bradshaw and Travis H. Brown, authors of the two off-brand initiatives. Bradshaw, a physician and personal injury lawyer based in Springfield, is essentially running a one-man “Ohio ’15” campaign, whereby he would control all the tax revenue generated by the state’s MMJ system. After getting his measure on the ballot, he then sued to knock the competing measures off the ballot. The courts tossed the case in early September.

Brown, a public affairs lobbyist, is keeping a lower profile, but St. Louis Post-Dispatch columnist Tony Messenger has accused Brown of being a stalking horse for a group of silent financial partners tied to St. Louis County Executive Steve Senger. According to Messenger, Prop C’s language grants local municipal authorities like Senger wide zoning and regulatory power to determine who gets the licenses to grow and sell medical cannabis.

The odds: “I think it has a good chance of passing,” Gov. Mike Parson said of medical cannabis legalization, in an interview with KMBC’s Micheal Mahoney on Sept. 5. Of course, Parson didn’t say which version of legalization he believes will carry the day.

With Measure 3, it feels like the state’s legalization advocates decided to roll the dice on a tomato-plant initiative,* the kind of measure envisioned by the cannabis pioneer Jack Herer. Measure 3 would remove “hashish, marijuana, and tetrahydrocannabinols” from the state’s list of Schedule I substances, and prohibit prosecution of anyone over 21 for any non-violent cannabis related activity (including growing, processing, selling, or testing), except for the sale of cannabis to a person under 21. The measure would also require the automatic expungement of prior cannabis arrests and convictions.

North Dakota residents could stack cannabis like bales of hay under the no-limit language in Measure 3. (kevinjeon00/iStock)
Who’s backing the measure: Legalize ND, the local advocacy group, is flying solo here. There’s no financial help or drafting language from Drug Policy Alliance or the Marijuana Policy Project. “We leave our bill wide open so the legislature can do their job — regulations, taxes, zoning, whatever,” Cole Haymond, an adviser to the Legalize ND campaign, told the Washington Post’s Christopher Ingraham. “This bill is by far the most progressive yet most conservative marijuana legalization bill that will be on any ballot across the country.”

* A tomato-plant initiative is a measure that treats the cannabis plant like a tomato plant, free for all to grow, consume and distribute as any person sees fit, without any state or local regulation whatsoever.

Leafly’s David Downs has an informative FAQ on what Prop 2 would and wouldn’t do, available here.

In certain limited circumstances, patients would be allowed to grow up to six cannabis plants for personal medical use. Prop. 2 would authorize the establishment of facilities that grow, process, test, or sell medical cannabis and require those facilities to be licensed by the state; and establish state controls on those licensed facilities, including: seed-to-sale inventory tracking, as well as limits on packaging, advertising, and the types of products allowed.

Medical marijuana enjoys widespread support throughout the state. It was polling at 75% earlier this year, but recently that support dropped to 64% following the Mormon church’s official statement opposing Prop 2. 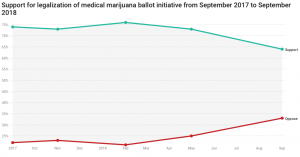 Who’s opposing it: The Utah Medical Association, Gov. Gary Herbert, and the leadership of the Church of Jesus Christ of Latter-day Saints, the single most powerful political entity in the state. The Drug Safe Utah Coalition, which is running an active “No on Prop 2” campaign, includes the Utah Sheriffs’ Association, DARE Utah, the Utah Eagle Forum, and others.

At the top of the ticket, Lt. Gov. Gavin Newsom is seen as a shoo-in to replace Gov. Jerry Brown, which would increase cannabis’ support in the governor’s mansion. Gov. Brown has repeatedly denigrated cannabis users as lazy and unfocused. By contrast, former San Francisco Mayor Newsom embraced cannabis law reforms early, similar to his leadership on same-sex marriage.

Polls suggest California Sen. Diane Feinstein (D) will skate into re-election in the mid-terms, fending off an insurgency on her progressive flank. After decades as a drug war hawk, Feinstein has been forced into evolving on supporting states’ rights to set cannabis policy. This September, the powerful Senate Judiciary Committee member also signed on as a co-sponsor of a cannabis descheduling bill.

Also of note in California, incumbent Rep. Dana Rohrabacher (R – Huntington Beach)—cannabis’ most staunch ally in the House of Representatives—faces a formidable Republican challenger for his seat. After 2016’s election interference by Russia, Rep. Rohrabacher’s pro-Russia statements and positions have dogged him.

At the local city and county level, California is awash in dozens if not more than 100 ballot initiatives to set local cannabis taxes and/or decide on allowing local dispensaries or farms. Voters also hold the power to approve of local stores and cannabis businesses through the election of hundreds of local city council members or county supervisors, many of whom are taking key positions on local store bans.

The race between Tallahassee Mayor Andrew Gillum (D) and Rep. Ron DeSantis (R) is a battle between an unabashed advocate of legalized regulation (Gillum) and an old-school prohibitionist (DeSantis). Whoever replaces outgoing Gov. Rick Scott will have a lot of say over the state’s emerging medical marijuana system, and over any possible adult-use legalization campaign. Leafly Deputy Editor Bruce Barcott wrote about the race here.

City of Dayton
Dayton voters will consider an advisory measure to decriminalize small amounts of cannabis. If voters pass the measure, the city council would still have to vote to confirm it. The measure calls on the council to eliminate the current $150 fine for minor misdemeanor marijuana and hashish possession offenses. 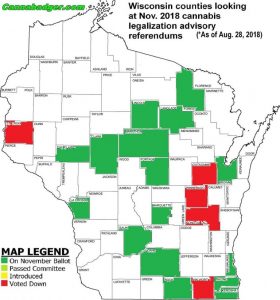 In an unusual campaign, cannabis activists in the Badger State have waged county-by-county combat to put legalization advisory measures on the ballot in November.

Because Wisconsin has no statewide initiative process, any full-state legalization measure would have to be approved by the state legislature.

These county ballots are expected to show legislators how popular cannabis reform is, and put added pressure on them to pass statewide medical or adult-use legalization in 2019.

Election 2018: A Complete Guide to Cannabis on the Ballot
cannabis legislation