How Many Jobs Depend on Legal Cannabis?

It’s not easy to determine how many full-time jobs are supported by America’s legal cannabis industry. But that doesn’t mean we can’t try.

As Leafly contributor Rob Reuteman reported yesterday, the federal government doesn’t allow cannabis jobs to be tallied using NAICS codes, which are the basis for most standardized employment data in the U.S., Canada, and Mexico.

There are 122,814 legal full-time cannabis jobs in America.
Documenting those jobs is more important than ever. The fate of state-legal cannabis remains uncertain as the Trump administration prepares to take office. At his Senate confirmation hearing next week, attorney general nominee Jeff Sessions will answer questions about legalization. Sessions has spoken out against legalization in the past, and many believe he may take steps to curtail the industry.

Sessions and members of the Senate Judiciary Committee should be aware of the more than 122,000 legal, hard-working, taxpaying Americans whose jobs are supported by legal cannabis. By tallying estimates for each state, we found 122,814 full-time jobs.

Behind every one of those jobs is a hard-working, taxpaying American. They’re the botanists at Medicine Man in Denver; the oil extraction technicians at Dama in Seattle; the budtenders at Farma in Portland; the mechanical engineers at Apeks Supercritical in Johnstown, Ohio; the scientists at Steep Hill Labs in Honolulu, Albuquerque, Seattle, and Portland. They’re lawyers at Harris Bricken, they’re software developers at MJ Freeway Business Solutions. They’re writers, editors, web developers, event planners, and customer support specialists here at Leafly.

They’re also farmers. With $1.27 billion in sales in 2016, Washington state’s cannabis crop now represents the second most valuable farmed commodity in that state, behind only apples—and ahead of milk, potatoes, and wheat.

If a Sessions-led Justice Department—which includes the DEA—were to interfere with successful, regulated legalization in 29 states, the Trump administration would be directly sending American jobs across our borders. Some ancillary businesses would survive; a few might move to Canada. But thousands of safe, legal American cannabis farming, harvesting, processing, and distribution jobs would be sent across the southern border to violent, criminal Mexican cartels.

And there are a lot of legal jobs out there. It took us three months to research and count them. Here’s what we found.

How We Arrived at That Estimate
Few states have reliable data on cannabis jobs. But each legal state keeps a tally of something. Some track the number of registered medical cannabis patients. Others keep tabs on licensed dispensaries, or annual sales figures. There’s usually at least one reliable number out there. Using that number, we did a little algebra. We solved for X using other known values.

Our starting points were Colorado and Arizona.

In October 2016, the Denver-based Marijuana Policy Group (MPG), a public policy consulting group that often does contract work for various state agencies, published a study of the cannabis industry’s effect on the Colorado economy. It included the most rigorous study on cannabis jobs to date. You can read the whole thing here.

The MPG study found that $996 million in Colorado cannabis sales in 2015 supported 18,005 full time equivalent (FTE) jobs. (The figure in the table above is higher because it’s based on estimated 2016 sales of $1.33 billion.)

The gold-standard study found 18,005 Colorado jobs based on $996 million in sales.
We had a long conversation with economist Adam Orens, one of the principal authors of that report. He told us how he and his colleagues came up with foundational job numbers by ground-truthing a lot of Colorado license holders. That is, they visited, called, and wrote to various business executives, asking how many people they employed.

Orens cautioned us on the use of his firm’s data. A professional economist, he said, would not transfer the Colorado assumptions and numbers to other states. “It wouldn’t be sound practice,” he said, because each state’s cannabis industry exists under different regulatory conditions. And no trade flows across state borders. When it comes to cannabis, each state is a hermetically sealed economic system.

With due respect to Orens and his MPG colleagues, we’re going to break that rule of non-transferability. It may not be the absolute best economic practice to do so. But the cannabis economy operates in an environment where incremental progress is necessary. Our numbers aren’t perfect. But they’re better than none at all. And a state-by-state good-faith effort is a far sight better than pretending, as the federal government does, that more than one hundred thousand legal full-time jobs simply don’t exist. 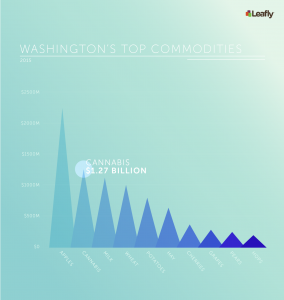 Establishing Known Values
Let’s create a known value. If $996 million in sales supported 18,005 full time (FTE) jobs in Colorado, then an average of $55,333 in sales were required to support one full time job. That’s a useful number.

Arizona also gave us a couple helpful known averages. The southwestern state maintains one of the nation’s most reliable counts of patients and dispensaries. Currently there are 99 dispensaries serving about 98,000 patients. The state also tracks how much cannabis—by weight—is sold by dispensaries and posts that data monthly. Thanks to the Leafly menu app, we know that cannabis sells for about $300 an ounce in Phoenix ($280 for bottom shelf, $360 for top). That’s $4,800 per pound.

Using that information, we can calculate an average $21.6 million per month in sales in Arizona, based on 4,500 monthly pounds sold at $4,800 per pound retail. That gives us a figure of $259 million in annual sales in Arizona. Spread among 99 registered dispensaries, that means each dispensary records around $2.6 million in annual sales. That’s a helpful estimate to have when the the number of operating dispensaries is the only known data point in some states.

Here’s another known value: Arizona’s $259 million, spread among 98,000 patients, works out to about $2,643 in annual medical marijuana purchases per patient. That’s about $220 per patient per month. Which, in our personal experience, seems about right.

If we apply Colorado’s jobs-per-sales number to the sales figures in other states, and Arizona’s per-patient and per-dispensary averages, we start getting some interesting job estimates.

Below, we explain how we arrived at full-time equivalent job estimates for each of the 29 legal states plus the District of Columbia.

For a state to state breakdown; Leafley

How Many Jobs Depend on Legal Cannabis?
cannabis opportunities