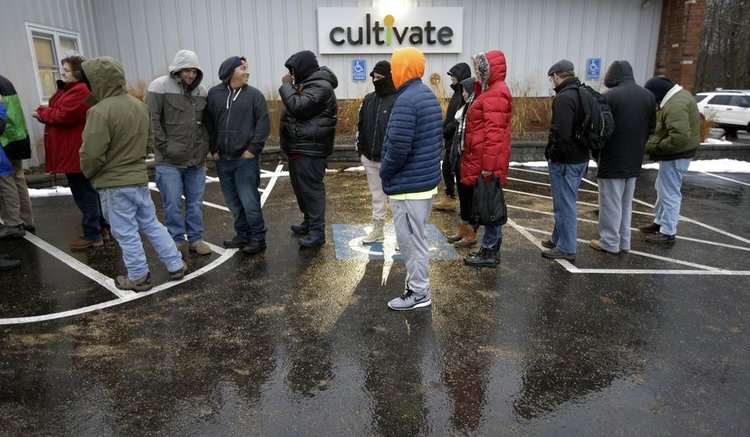 The only two dispensaries licensed to sell recreational marijuana in Massachusetts reported a combined total of more than $400,000 in sales during their first day of catering to retail customers.

Customers purchased a total of 10,784 marijuana products from the two pot shops Tuesday, spending $440,011 between both dispensaries during the inaugural date of the state’s recreational pot law taking effect, regulators said Wednesday.

In 2016, Massachusetts voters approved a referendum legalizing recreational marijuana and launching a system for taxing and regulating the plant. State officials previously said they expected retail pot sales would generate upwards of $63 million in tax revenue for the state during fiscal year 2019. Regulators only issued their first retail licenses last week, however, making the start of recreational sales this week more than two years in the making and more than four months behind schedule.

Representatives for the dispensaries, New England Treatment Access in Northampton and Cultivate in Leicester, said they sold marijuana Tuesday to roughly 2,000 and 1,000 customers, respectively, The Boston Globe reported.

“We are humbled by the overwhelmingly positive response during the first two days of sales,” said Sam Barber, Cultivate’s president. “This is an enormously gratifying moment for the whole Cultivate team to finally get to sell the products we have obsessed over creating for the past two years.”

“There was a little bit of magic in the air yesterday,” said Norton Arbelaez, NETA’s director of government affairs. “It’s really pleasing to see all the preparations we’ve done over the past two years come to fruition.”

Both of the dispensaries also cater to customers in accordance with the state’s previously established medical marijuana program. It was not clear what percentage of Tuesday’s figures related to medical marijuana sales, and the Massachusetts Cannabis Control Commission did not immediately return a message seeking clarification.

The start of recreational marijuana sales in Massachusetts this week made the state the seventh in the country where adults can legally purchase the plant for non-medicinal purposes from licensed dispensaries, and the first east of the Mississippi River.

Recreational marijuana sold by licensed dispensaries in Massachusetts is subject to the state’s standard 6.25 percent sales tax plus a 10.75 percent excise tax, as well as additional local taxes where applicable, including a 3 percent local tax imposed in both Northampton and Leicester.

Massachusetts missed out on upwards of $16 million in marijuana taxes by not licensing recreational dispensaries on schedule, individuals behind the 2016 effort to legalize the plant said previously, The Globe reported last month.