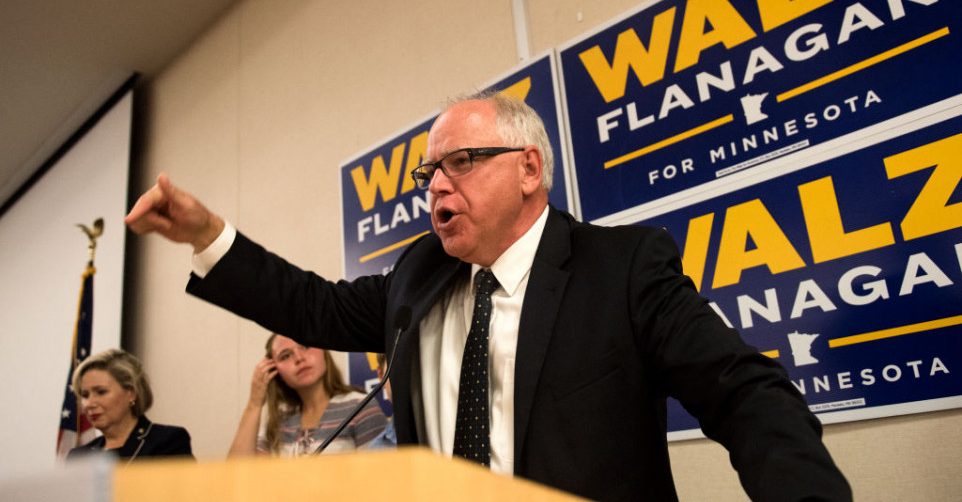 Minnesota Governor-elect Tim Walz (D) says it’s time for the Midwest state to get a move on with cannabis legalization.

Walz has been a sturdy ally to marijuana reform throughout his time as a congressman. He previously pushed for Veterans Affairs to bring medical marijuana to veterans, and now that he’s governor, he wants to see some big changes on the state level.

“I just think the time is here and we’re seeing it across the country,” Walz told The Daily Journal. “Minnesota has always been able to implement these things right.”

Walz isn’t alone in his desire to legalize cannabis in Minnesota. The Democrat-controlled House seems to be on his side as well. And experts think there is just enough interest in the state for the issue to get pushed through the legislature.

“If you’re looking for a sleeper issue, this could be it,” said Larry Jacobs – Director of the University of Minnesota’s Center for the Study of Politics and Governance. Jacobs says marijuana isn’t likely “to be the top priority” for the new administration, but “it could be one of those things that kind of sneaks through.”

The Republican-led Senate, however, is not so keen on the issue. Senate Minority Leader Paul Gazelka (R) says cannabis legalization “is not good for the state.” And local religious groups like The Minnesota Family Council agree.

“Any financial gains for the state as a result of taxing legalized marijuana will eventually be needed to cover social costs resulting from marijuana use,” Minnesota Family Council CEO John Helmberger said.

However, Walz believes that tax revenues generated through cannabis sales could actually fund addictions services and youth education campaigns. He also wants racial equality to be a central part of the new law, which would also have nonviolent cannabis convictions expunged.

“I think that’s an important component of this,” he said. “Give people the opportunity to get out, start fresh and realize that society has moved and changed on this issue and we can get it right.”

With Michigan leading the way as the first Midwestern state to legalize recreational cannabis, the doors are now open for changes more broadly through the region. Here’s hoping Walz gets his way.