POLITICSFirst Congressional Marijuana Vote Of 2019 Officially Scheduled For Next Week

A bipartisan bill designed to protect banks that service the marijuana industry from being penalized by federal regulators will get a vote in a key congressional committee next week.

The legislation, which was discussed during the first cannabis-related hearing of the 116th Congress last month, will go before the House Financial Services Committee on Tuesday.

Reps. Ed Perlmutter (D-CO) Denny Heck (D-WA), Steve Stivers (R-OH) and Warren Davidson (R-OH) are the chief sponsors of the Secure and Fair Enforcement (SAFE) Banking Act. It was formally filed earlier this month, and currently has 138 cosponsors—more than a quarter of the House. 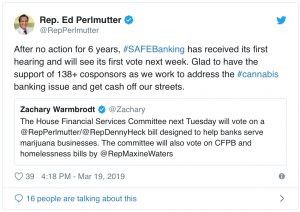 “For six years, Congress has failed to act on the issue of cannabis banking, putting thousands of employees, businesses and communities at risk,” Perlmutter said in a statement emailed to Marijuana Moment. “However, the issue is finally receiving the attention it deserves with the first-ever congressional hearing and now a scheduled committee vote.”

‘Among the cosponsors is the chair of the committee herself, Rep. Maxine Waters (D-CA), who spoke about addressing banking issues in the cannabis industry shortly before assuming the position. Judiciary Committee Chairman Jerrold Nadler (D-NY) and Rules Committee Chairman Jim McGovern (D-MA), have also signed onto the legislation—demonstrating its support among powerful Democratic leaders of the House.

All of this sets the stage for a potentially game-changing vote, as Republican leadership during the last Congress consistently blocked marijuana-related bills from even being considered. With Democrats in control and leading lawmakers embracing the legislation, it stands a good chance of heading to the full House and then on to the Senate.

Resolving banking problems for marijuana companies was one of several legislative goals that Rep. Earl Blumenauer (D-OR) outlined in a blueprint to end federal marijuana prohibition he sent to his party’s leaders last year.

“The banking issue is just one aspect of the failed policy of federal marijuana criminalization. In order to truly bring the marijuana industry out of the shadows, actions need to be taken by Congress to amend this, and many others, outdated and discriminatory practices,” Justin Strekal, political director for NORML, said in a statement. “This will certainly not be the last hearing of this Congress to discuss marijuana prohibition and we expect a full hearing on prohibition to be scheduled in the months to come.”

There were several changes made to the banking bill since it was last introduced in the 115th Congress. For example, the legislation clarifies that protections are extended to financial institutions that work with ancillary cannabis business—not just those that directly sell marijuana or marijuana products.

There have been widespread calls to tackle the banking problem, including from members of Congress and representatives of cannabis businesses. With this vote, it seems those calls are at least starting to be answered.

Meanwhile, Nadler has signaled that his Judiciary Committee may also take up broader marijuana legislation soon.

“With 97.7 percent of the U.S. population living in a state where voters have legalized some form of adult recreational, medical or limited-medical use of marijuana, congressional inaction is no longer an option,” Perlmutter said. “And with broad, bipartisan support in the House, I look forward to the SAFE Banking Act continuing to move forward in the Financial Services Committee and on the floor of the House.”