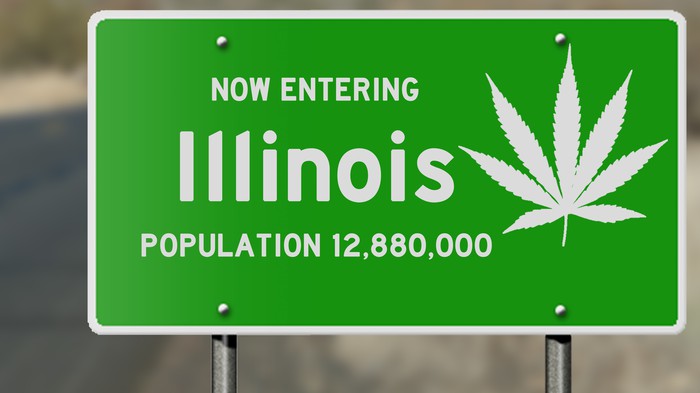 Another big state appears to be headed toward legalizing recreational pot. Illinois Governor J.B. Pritzker and state lawmakers announced a proposal over the weekend that would legalize the use and sale of recreational marijuana in the state in 2020.

If the proposed legislation passes, Illinois will become the 11th state to legalize recreational pot. And it would be the second-largest potential recreational marijuana market in the U.S. based on population, trailing only California.

The proposed bill won’t allow new large marijuana producers to establish operations in Illinois, though, at least initially. This means that already-established players in Illinois could be significant winners. Three stocks that appear to be especially poised to profit should the state legalize recreational pot are Cresco Labs (NASDAQOTH:CRLBF), Green Thumb Industries (NASDAQOTH:GTBIF), and MariMed (NASDAQOTH:MRMD). Here’s what makes these three stocks stand out.

1. Cresco Labs
Cresco Labs is one of the largest multistate cannabis operators in the U.S. The company currently claims operations in seven states but also has pending transactions that would put it into three additional states.

Since Cresco is headquartered in Chicago, you might expect that Illinois would be one of its key markets. And you’d be right. Cresco is so far the only company in the state to reach the maximum number of dispensaries and cultivation facilities allowed. It’s also expanding production capacity in Illinois, with additional space at its Lincoln facility anticipated to be operational within the next few months.

The company could also soon grow significantly through a key acquisition. Cresco Labs announced in April that it plans to buy Origin House. The deal would give the company a large cannabis distribution operation in California as well as an opportunity to enter the Canadian market via Origin House’s ownership of 180 Smoke, a leading vape retailer in Canada.

The company is involved throughout the cannabis supply chain. GTI has 13 production facilities and holds 88 licenses for cannabis retail locations. It currently operates 18 cannabis retail stores, four of which are located in Illinois.

Earlier this year, GTI acquired luxury cannabis brand Beboe. Products bearing the Beboe brand are currently marketed in California and Colorado — the two biggest legal marijuana markets in the U.S. In April, Beboe launched a line of cannabidiol (CBD) skin care products that are being sold in upscale stores including Barneys New York and Neiman Marcus.

3. MariMed
MariMed ranks as one of the largest cannabis and hemp operators in the U.S. The company initially focused on providing advisory services to cannabis businesses. Now, though, MariMed is buying up its customers to directly manage operations.

The company already operates a cannabis production facility in Illinois. In 2018, MariMed acquired Betty’s Eddies, the most popular brand of cannabis edibles in the state.

Perhaps the biggest growth opportunity for MariMed right now is in hemp. Thanks to the passage of the farm bill in December, hemp is now legal in the U.S., and MariMed has taken several steps to position itself in the U.S. hemp industry. It invested in Kentucky-based, hemp-derived CBD producer GenCanna in November 2018. It established a subsidiary focused on the hemp CBD market in January. And just a few weeks ago, MariMed acquired a 70% stake in CBD company MediTaurus.

Unfinished business
While Cresco Labs, Green Thumb Industries, and MariMed should profit if Illinois legalizes recreational marijuana, there remains some unfinished business. The legislation proposed by Gov. Pritzker has to first pass both houses of the state legislature.

At this point, however, it seems pretty likely that Illinois will become the 11th state to legalize recreational pot. Pritzker’s fellow Democrats enjoy majorities in the state’s House of Representatives and Senate.

Don’t look for Cresco, GTI, and MariMed to begin seeing higher sales at the start of 2020, though, even if the proposed legislation passes. Illinois won’t issue licenses for growers, processors, and dispensaries until May 2020 at the earliest.