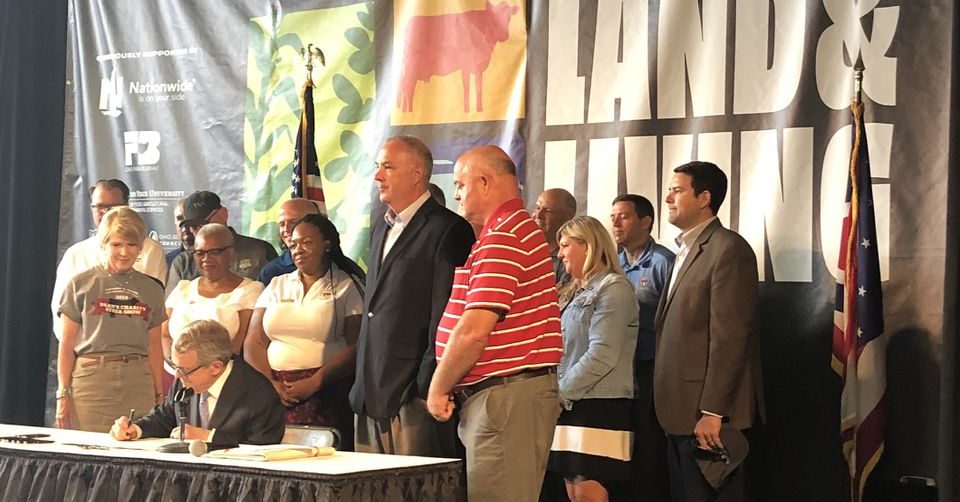 Gov. Mike DeWine signed a bill Tuesday morning that legalizes industrial hemp and products made from its active ingredient, cannabidiol or CBD – which will begin a new agricultural commodity industry in Ohio.

They have to wait for Ohio Department of Agriculture Director Dorothy Pelanda to write the rules for the program, said Jen Lynch, executive director of the Ohio Hemp Association, a trade group that’s advocated for the bill.

“She will have to get that approved by the USDA,” Lynch said.

After the bill was signed the Ohio Department of Agriculture unveiled a new website with information on hemp and CBD.

“We’ve got six people managing phones at the Department of Agriculture with the goal of educating the public,” said Pelanda after the bill’s signing.

Pelanda said she anticipates it’ll take about six months to write the rules and get them cleared by a committee made up of legislators who review agency rules. In August, she’s going before another board to ask for $12 million to get the program going. The money would be spent to create a hemp lab to test hemp and CBD products and for technical training.

Meantime, stores can now stock CBD oils and other products. Pelanda said food safety inspectors are going to markets, checking for truth in labeling, making sure what is out there right now is not making untrue claims.

Many stores have had products purporting to contain CBD on the shelves for years. But in some parts of the state, inventory has been seized.

The new law also outlines a process by which people can get their seized CBD products back.

CBD champions say its chemical compounds contain medicinal properties. People even give it to their pets because they believe it calms them.

CBD products under the new law can only contain trace amounts of THC, or tetrahydrocannabinol, which is the active ingredient producing the “high” in marijuana. Specifically – they can only contain a THC concentration of up to three-tenths percent on a dry weight basis.

Marijuana and hemp are technically different plants, but they share the same genus – cannabis. DeWine described hemp and marijuana plants as cousins — related but not the same.

State law had lumped hemp in with marijuana and subjected it to state and federal drug laws. The federal government allowed states to implement hemp programs in the 2018 Farm Bill.

Lynch, of the Ohio Hemp Association, said she suspects Ohioans who will grow hemp will include both traditional agricultural operations and hobby farms.

“I can tell you a lot of the folks in traditional agriculture — soybean and corn –as well as those who have access to land are interested in the hemp space for various reasons.”

Rocky River resident Garett Fortune plans to be among the first to apply to the state for permission to grow hemp — a process that will require a criminal background check and proof of financial, equipment, land and facility abilities to get into the industry.

Fortune said he wants to grow hemp near Sandusky and process the plant to extract CBD in Cleveland. Fortune, owns a number of cannabis companies — including hemp and marijuana packaging companies, one of which is a partnership with hiphop artist Snoop Dogg — and grows hemp in a handful of states, including North Carolina, Kentucky and New York.

“It’s huge,” he said. “The soy farmers are replacing soy with hemp,” he said. “You can make a lot more per acre.”

Last year, 25,000 acres of hemp were planed across the U.S. This year in Kentucky alone, Fortune said 50,000 acres have been planted.

“Prices are going to come down a bit,” he said. “But also there’s such a demand for it that it’s not going to happen for the next three to five years. We’re on an upward swing, and then things will level out.”