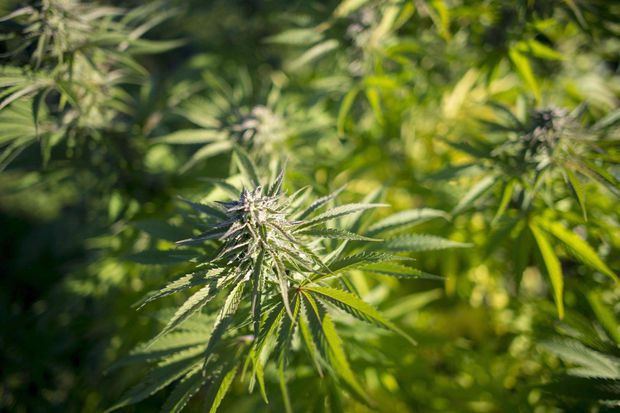 The Nasdaq Stock Market will list its first cannabis shares on Tuesday, marking a key milestone for an industry that has been rejected by the Trump administration.

Cronos Group Inc., which already trades in Canada, will be the first marijuana company on a major U.S. exchange — right alongside Nasdaq stocks such as Apple Inc., Microsoft Corp. and Starbucks Corp.

The listing could help expand the so-called Green Rush. U.S. investors who were previously uncomfortable or restricted from putting funds abroad or into over-the-counter stocks now have a mainstream option that has passed muster with the Securities and Exchange Commission.

“It’s very significant for the company and the whole industry,” Mike Gorenstein, Cronos founder and chief executive officer, said in an interview. “It’s a huge moment — just shows the stigma is continuing to erode on cannabis.”

The move comes as the marijuana industry is expanding across the world. Uruguay has legalized cannabis federally for all adults, and Canada is expected to follow suit later this year. Germany is among about 30 countries that allow medicinal sales of the plant.

In the U.S., nine states and Washington, D.C., have legal recreational pot, and 29 states have legal medical cannabis. The American market alone is expected to reach $50-billion by 2026, up from $6-billion in 2016, according to investment bank Cowen & Co.

Cronos is taking advantage of the international opportunity. The Toronto-based company produces and sells medical marijuana in Canada. It also ships its products to Germany, where they are distributed by G. Pohl-Boskamp GmbH.

Cronos is also building a growing facility in partnership with a kibbutz in Israel and has received a license through a joint venture in Australia. Eventually, the company hopes to have a presence in the U.S. too, Gorenstein said, but not until it’s legal at the federal level.

Nasdaq’s approval came after Cronos spent six months doing preparatory work, leading up to an application for listing filed this year. The company had worked with Nasdaq to get approval for an over-the-counter listing last year.

The news helped send Cronos shares up as much as 11 per cent to $9.83 on Monday. The stock had fallen 7.3 per cent this year through Friday’s close.

For Cronos, listing in the U.S. could open the doors to significant capital. It will also clear up confusion surrounding legal investment, Gorenstein said. About one of every three calls and discussions he’s had with American investors has focused on whether they can legally invest in the Canadian entity.

The confusion isn’t without cause. Cannabis is still federally illegal in the U.S. Attorney General Jeff Sessions in January rescinded the Obama-era protections that allowed state-legal industries to thrive.

Cronos was “laser-focused” on making sure it was absolutely ready to conform to the U.S. SEC standards before filing its application to list on Nasdaq. That made the process relatively smooth.

“It was an exercise in checking everything we do and looking in the mirror and asking are there any gaps, because if we’re used as an example for other cannabis companies, we want to make sure that we’re setting the right example,” Gorenstein said.

Even before he founded Cronos, Gorenstein was no stranger to regulated industries. He started his career as an M&A lawyer, mainly working with alcohol and pharmaceutical companies.

There may be opportunities to team up with big companies in those spaces. Constellation Brands Inc., which sells Corona in the U.S., last year made a direct investment in Canopy Growth, one of Cronos’s competitors. A bigger partner can help capitalize on the industry’s enormous growth potential over the next few years.

“We’re driving to go from zero to Pepsi in two years,” Gorenstein said. “That’s quite a bit to do without any help, so having partnerships — whether it’s an investor, distribution, joint development with alcohol and pharmaceutical companies — is very, very helpful.”

Gorenstein’s legal background has kept the company rooted in compliance, he said. Federal illegality in the U.S. is what drove Cronos’s founders to locate and expand the company in Canada, where the plant has been federally legal for medical use since 2001. Still, Gorenstein said he hopes Cronos’s listing will bolster companies on both sides of the border.

“This hopefully serves as a catalyst and is helpful to the U.S. companies as well just in terms of eroding stigma,” he said. “Because we do want to see the industry move forward as a whole.”