What Is CBD Oil And Why Are People So Into It? A Guide 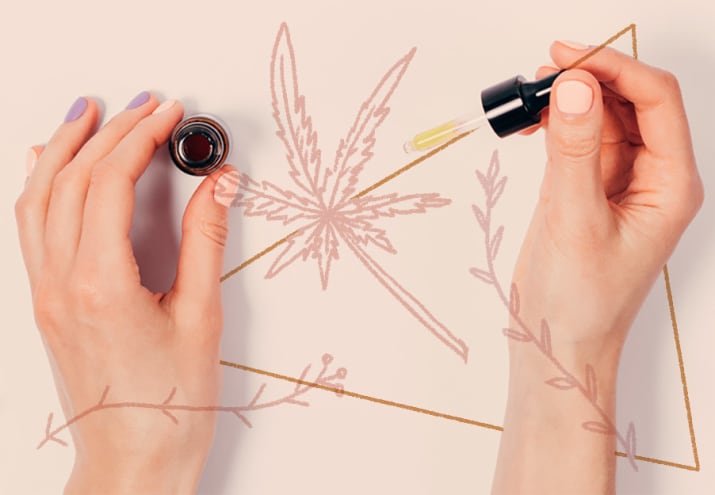 In huge swaths of the country, medical cannabis is officially A Thing. But regardless of whether or not your state has legalized the stuff, you can still reap some of its benefits. In fact, there’s an entire world of cannabis-derived products that don’t get you high but promise some type of pain relief.
That’s the promise of CBD, a cannabis compound that’s been found to alleviate pain and even clear common skin conditions. So just what does CBD promise? Does it actually work? And will it cause you to fail a drug test? Let’s break down the, um, highs — and the lows — of CBD.

1. What is CBD?
CBD (short for Cannabidiol) is one of the more than 100 naturally occurring compounds in the hemp plant. THC — the compound that gets you high — is another one. Unlike medical marijuana products (which are derived from plants with high concentrations of THC), CBD oil is made from high-CBD, low-THC hemp. In other words, CBD oils can provide medical benefits without making you feel “stoned.” In fact, CBD can actually counteract the psychoactivity of THC.

2. Mmm, OK. So, how does CBD work?
According to Stuart Titus, CEO of Medical Marijuana, Inc. (which sells CBD oil products through its distribution subsidiary HempMeds), CBD interacts with the body through the endogenous cannabinoid system (ECS), a neuromodulatory system that plays important roles in central nervous system development and the body’s response to internal and external factors. In other words, the ECS regulates the body’s homeostasis, keeping those who ingest it a bit more balanced, and those who apply it topically a bit less pained — particularly if they apply it to a painful area (a sore shoulder, that kind of thing).

Titus points to a patent awarded to the National Institute of Health, which described CBD’s many antioxidant and neuroprotectant benefits. “The research found that the antioxidant and anti-inflammatory benefits are even greater than we see with Vitamin C and Vitamin E,” he tells BuzzFeed. “We see benefits to those with metabolic syndromes — heart disease patients, those with diabetes, arthritis, even types of cancers — and neuroprotective benefits — those with alzheimer’s, PTSD, MS, and, anecdotally, epileptic seizure disorders.”

While ingesting CBDs provide the most benefits, the body will absorb products topically, as well — and many have found some of the same benefits.

3. Hmmm…I’m wary about drugs and I’m not sure I want to be ~impaired~.
If the CBD products are applied topically and don’t contain THC, they won’t get you high (or require a medical card to purchase). So CBD still might be for you! Particularly if you suffer from aches, pains, are post-operative — or even if you have a breakout. But more on that later.

4. Does CBD, you know…work?
As Buzzfeed has previously reported, clinical trials on humans have shown that CBD can effectively treat severe forms of childhood epilepsy. Any health or wellness claims beyond that are basically anecdotal. That said, when it comes to CBD and pain relief, the anecdotes are piling up.

“We have a lot of customers who previously used prescription medication to address chronic pain and now they use our lotion,” says Cindy Capobianco, the founder of CBD beauty brand Lord Jones, a purveyor of CBD lotions and gumdrops.

To be fair, not all of that success can be attributed to topical CBD alone — some use it in conjunction with edible, THC-based products. “Many of our customers will take, for instance, five milligrams of THC, and then use our lotion topically and play with the dosage to see what works for them,” Capobianco says.

Others use topical CBD topical products exclusively (without the addition of edible or ingested THC) and intuitively — i.e. exactly where it hurts. “Migraine sufferers will use our lotion topically, on their ice pick headaches, while menstrual sufferers and endo sufferers use it topically on their abdomen,” Capobianco adds. Some Lord Jones users have even been known to rub the lotion all over their feet before wearing heels to a red carpet event — again, for the pain relief.

Kevin Wachs, the founder of Earthly Beauty, a 25-year-old hemp-based beauty company based in Los Angeles, started using CBD serum for pain relief around the time he turned 60. “I’ve been a musician for forty years — a drummer so my wrists and my elbows are always hurting,” he says. “I now use our serum and it’s almost instant relief.” The serum is part of Earthly Body’s CBD Daily line, introduced roughly a year ago.

Shortly after its launch, Wachs said his company quickly discovered a niche market of those combatting pain on a daily basis: salon workers. “This is an industry filled with pain — manicurists using their hands all day, stylists on their feet all day,” he says. “And it was like a fish to water.”

5. What forms does CBD take?
These days, CBD can be found in oils, serums, candles, edibles, and more. Medical Marijuana, Inc. products include Real Scientific Hemp Oil (RSHO) CBD, which comes in a variety of potencies and delivery methods: as a liquid oil, in a capsule and as a paste in an oral applicator. Lord Jones sells its lotion and CBD gum drops; Los Angeles’ Alfred Tea will soon be introducing a CBD beverage; Earthly Body is developing a line of CBD hair care products; Gwynne Mims Minter, the owner of high-end apothecary Gloss Goods in Jacksonville, Florida recently launched her own line of CBD bath bombs.

6. And you’re sure CBD lotions and oils won’t get me stoned?
Despite its therapeutic effects, experts say CBD isn’t psychoactive in the same way as THC is. “It doesn’t make people high, and it may even counteract the effects of THC,” Susan Weiss, director of the Division of Extramural Research at the National Institute on Drug Abuse and an expert on marijuana science and policy, previously told previously told BuzzFeed.

So the short answer is no, CBD won’t get you high — though some experts still urge users to exercise caution. Bottles of Lord Jones lotion are designed so that each pump is precisely dosed — one pump dispenses one milliliter of lotion containing two milligrams of CBD. Capobianco typically recommends one or two pumps on problem areas, though more wouldn’t necessarily be harmful. “I think you could use the entire bottle and not feel anything,” she says.

That said, there are topicals that include THC — these are sold only where recreational marijuana use is legal — which may have a different effect. One particular THC-containing topical, which Capobianco purchased in Colorado, wound up causing her to experience a high in the middle of her child’s dance recital. “First, I used it on an injured shoulder and it felt so good I slathered it everywhere, eventually using half the bottle,” she recounts. “I then went straight to a four-hour recital with my children and I was alternately crying and laughing and eating a bag of Funyons throughout the show.”

7. Will over-the-counter CBD products make me fail a drug test?
If a CBD topical or oil contains THC, yes, you could fail a drug test. If it doesn’t contain THC, then no, though this is a reasonable question. Even some common hemp products (like KIND bars containing hemp seeds, for instance) have been found to cause military employees to fail drug tests.

Zero-THC CBD products, though, should be safe. “Even the World Anti-Doping agency has given the thumbs up to CBD, allowing athletes to use it as long as it doesn’t contain THC or doesn’t metabolize a banned substance,” says Titus. “Most CBD products that contain any THC have such a trace amount that it wouldn’t create any psychoactive effects whatsoever.”

8. Is it legal everywhere?
Welcome to the gray area. In March, Senate Majority Leader Mitch McConnell announced his plans to introduce legislation to legalize the hemp crop as an agricultural commodity, though current laws governing CBD are still murky. As recently as April, an Indiana man found himself criminally charged (and facing a $1,000 fine) for possessing CBD oil, a case that was ultimately dismissed due to the passage of a CBD law. According to Titus, in compliance with Federal Law and the Farm Bill, under the Appropriation Acts of 2016, CBD extracted from industrial hemp (less than .3% THC) can be “transported, processed and sold” nationwide. Because of this law, consumers can obtain CBD products derived from hemp without acquiring a medical marijuana card and without living in a state where cannabis products are sold. But CBD products derived from marijuana plants are not federally legal, and are only accessible in states with pro-cannabis or CBD laws.

9. So you can really just buy CBD products online, or at the local corner store?
It seems kind of shady, right? Especially if you’re unfamiliar with CBD, it might be surprising that cannabis-derived products are so readily available — and to those without a medical card. But if you’re wondering whether your local health food store is trying to scam its customers or sell something illicit, the answer is likely no. Many CBD products are available at a variety of retailers, including online or over-the-counter, because they don’t cause users to get high — and, as we’ve already discussed, that’s not even what they’re intended to do.

10. About how much should I expect to pay for it?
CBD products can range from $25 to a couple hundred dollars for more concentrated versions. “It’s been nice to see that, over time, prices have been coming down as supply has increased on world markets,” Titus says. Of course, price all depends on product. Lord Jones’ CBD lotion is $50 per 1.7-ounce bottle; De La Beaugh sells a CBD coffee scrub for $10.

11. So, in addition to the ~alleged~ pain treatment, does CBD do anything else?
*Anecdotally*, CBD products have been found to have some other benefits. You can find lotions and potions that claim to combat acne, rosacea, or other skin issues, for instance but, again, the science isn’t really there yet. Titus says that some research has been done on CBD and acne, though it’s still in the early stages. Of course, as with any skincare product, you can do your own research via review sites like Reddit or Makeup Alley (it’s always nice to hear how others’ skin has responded to new products before testing it on yourself).

12. Why am I just now hearing about it?
CBD isn’t new, but the products have undergone a bit of a renaissance in recent years — and much of that hinges on the fact that the conversation around medical marijuana has shifted in recent years. What was once illegal and underground is now not only legal, but it might be prescribed by your doctor. And because it’s still new, at least in the beauty and wellness world, its many uses are still being determined. “Chiropractic offices and health food stores have been selling CBD for a while, they just haven’t branded it well,” agrees Mims Minter. “And it hasn’t been seen in a beauty capacity at all.”

Wachs equates the recent interest in CBD to that of another ancient ingredient. “CBDs have been around for thousands of years — just like argan oil. What changed is the way both were marketed and presented.”

The bottom line — CBD actually isn’t as “naughty” as it might appear.
Still, there’s a stigma attached to CBD products, even if they don’t get you stoned. For some people, that’s part of the draw: whether legal or not, it still feels a little bit ~bad~. Fortunately for those of us who don’t want to go that route, CBD is actually pretty wholesome, as far as topicals go. In fact, far from being harmful or illicit, proponents say it’s downright good for you.

What Is CBD Oil And Why Are People So Into It? A Guide
CBC benefits