This New Cannabis Craze Has Made Early Investors Rich 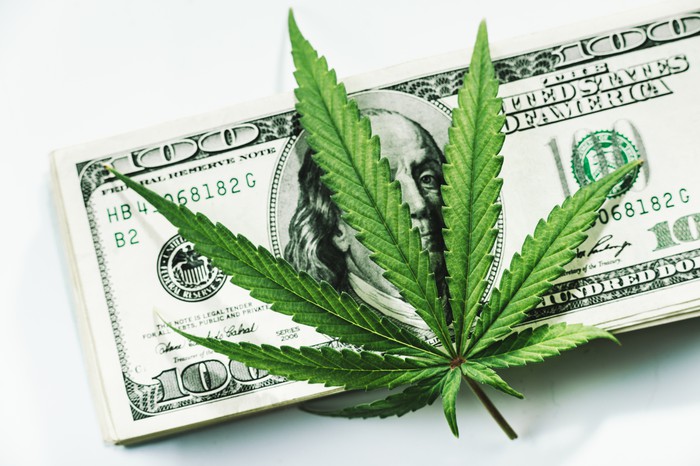 Marijuana stocks have been on fire lately, with investors looking at the rising tide of new jurisdictions in which marijuana is becoming legal for recreational use. With the entire nation of Canada legalizing recreational cannabis later this month, the companies that will provide the marijuana that users want to smoke see a potential gold mine ahead.

But there’s another area of the cannabis market that’s only now starting to get more attention. Both well-established cannabis companies and new upstarts are moving full speed ahead to develop consumer products that could potentially have a much larger addressable market than those who want to smoke weed. Along the way, investors in companies like New Age Beverages (NASDAQ:NBEV) and India Globalization Capital (NYSEMKT:IGC) have seen their shares soar — and even more gains could lie ahead for those seeking to develop and sell drinks infused with cannabidiol (CBD).

What is CBD?
Cannabidiol is a chemical compound that’s found naturally in marijuana. Unlike other compounds found in marijuana, especially tetrahydrocannabinol (THC), CBD lacks the extreme psychoactive impacts associated with cannabis use.

Many of those in the cannabis industry tout the beneficial medical impacts of cannabidiol. Pharmaceutical companies have looked closely at CBD, and there have been some notable successes in discovering promising treatment. The most noteworthy is GW Pharmaceuticals’ (NASDAQ:GWPH) Epidiolex, a CBD-derived treatment for certain forms of epilepsy that gained approval from the U.S. Food and Drug Administration earlier this year.

Setting the stage for CBD-infused beverages
The beverage industry has gone through a transformation of its own recently, moving away from sugary sodas toward healthier offerings. As cannabis products become legal, the ability to offer CBD-infused beverages hits two high-demand themes hard: legal recreational cannabis and the opportunity to test products that could have health benefits.

Some of the giants of the budding marijuana industry were among the first to look seriously at CBD-containing beverages. One reason why Canopy Growth (NYSE:CGC) attracted the attention of Constellation Brands (NYSE:STZ) for a major investment was that the two companies saw the potential profits from experimenting with drinks containing cannabis-derived ingredients. Similarly, Coca-Cola (NYSE:KO) has searched for growth opportunities, and reports suggest it could collaborate with Canada’s Aurora Cannabis (NASDAQOTH:ACBFF) to produce a beverage with CBD.

3 smaller stocks for CBD beverages
Canopy and Aurora has already grown to massive size, but three other companies are still relatively small despite having seen explosive gains in their share prices: HEXO (TSX:HEXO), New Age Beverages, and India Globalization Capital. Their stories are interesting and are still developing rapidly:

HEXO, formerly known as Hydropothecary Corp., made a deal with brewer Molson Coors (NYSE:TAP) to explore nonalcoholic CBD-infused beverages. Under the arrangement, a joint venture will work to develop the drinks, and although Molson insists that it wants to remain focused squarely on the beer business, success for CBD drinks could give it an additional growth driver.
New Age Beverages hasn’t yet made a partnership with a large beverage producer, but it’s not wasting any time. The company will present a lineup of CBD-infused products at an industry conference early next week, and investors have sent the stock soaring in response. Shareholders hope that the trade show will spur interest from traditional beverage companies so that it can join HEXO and Canopy.
India Globalization is a Maryland-based company that has primarily been looking at cannabis-based therapeutic treatment prospects. However, it moved into the limelight when it also said it would release its Nitro G CBD-containing energy drink, having announced a partnership arrangement with a Malaysian cannabis supplier.

Will CBD beverages go mainstream?
Several obstacles remain for CBD-infused beverages. Legality is still an issue in many jurisdictions, and even in places where they are legal, regulations aren’t always crystal clear about what marketing and distribution practices companies can use. Even if the drinks become popular, profitability isn’t guaranteed, as margins in many consumer-oriented businesses get tightened with major competition among key players. Many see the CBD-beverage niche as a fad that will simply rise and fall along with many similar trends before it.

Nevertheless, what no one can dispute is that early investors in cannabis stocks pursuing CBD-infused beverages have fared quite well so far. That’s not guaranteed to continue, and investors must be wary of the risks involved in the industry. Yet for the winners, there could still be upside if drinks containing CBD become the next must-have trend in the beverage industry.

10 stocks we like better than HEXO Corp.
When investing geniuses David and Tom Gardner have a stock tip, it can pay to listen. After all, the newsletter they have run for over a decade, Motley Fool Stock Advisor, has quadrupled the market.*

David and Tom just revealed what they believe are the ten best stocks for investors to buy right now… and HEXO Corp. wasn’t one of them! That’s right — they think these 10 stocks are even better buys.