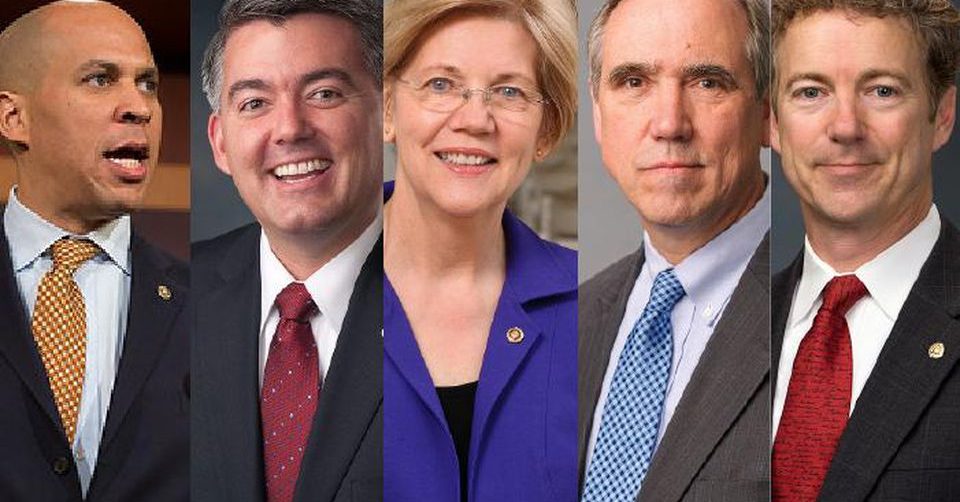 With the 2018 election almost upon us, I’ve spent the last few weeks thinking about why Congress has never passed a bill legalizing marijuana. Despite overwhelming public support for both medical marijuana and regulating it like alcohol, our government has been incredibly slow to turn that into policy. There are many reasons for this, but 535 of the biggest reasons are the members of Congress themselves — debates in the legislative branch aren’t just abstract concepts, but conversations between real people with their own beliefs and priorities.

I started this series with the five best U.S. House Reps on marijuana policy, and followed that up with the five worst House members. This week, I’m turning my attention to the Senate, and once again I’ll lead with the best. My team at 4Front and I looked at senators’ voting records, public statements, committee positions, and other factors to see who ranks as the top champions of reform in the legislature’s upper house.

Despite having fewer members to choose from, narrowing down the top five leaders in reform was even harder in the Senate than in the House. This is because there are far more than five champions in the Senate, with multiple strong champions on both sides of the aisle. In NORML’s 2016 Congressional Scorecard, 38 Senators got a B or higher. The CARERS Act of 2015, which would have legalized medical marijuana, got up to 19 sponsors. The STATES Act of 2018, which would allow states to legalize marijuana for adults, currently has 10 sponsors.

After putting this list together, I did notice one major trend: Jeff Merkley, first elected in 2008, is the most senior senator in our top five. Since he is only the 44th most senior senator overall, this reflects the generational nature of marijuana reform. Politicians who just got elected did so at a time when marijuana legalization outpolls most candidates, while those who entered public service decades ago came of age when supporting legalization was taboo. Some candidates have updated their views, but sometimes they hold onto their prohibitionist beliefs until they’re voted out of office.

Another trend that sticks out is that, while this remains a largely bipartisan issue, it has become one that Democrats with national aspirations now must embrace in order to be viable in a Democratic primary. Between those who made the list and the honorable mentions, it includes most of the Democratic Senators largely considered front runners for the 2020 party nomination. Even former prosecutor Kamala Harris (D-CA) who didn’t quite make the cut has recently embraced legalization in her rhetoric. As Republicans like Cory Gardner from states with legal cannabis have started coming around on legalization, supporting prohibition has become an untenable position for anyone seeking elected office as a Democrat, a notable shift in the party’s dynamics over the past few years.

Senator Booker was first elected in a 2013 special election, and then won a campaign for a full term in 2014. As a member of the Judiciary Committee he quickly became a champion of marijuana policy reform, either introducing or sponsoring nearly all of the major reform bills considered by the Senate. In 2015, he was one of three senators to introduce the CARERS Act to legalize medical marijuana (he also re-introduced it this Congress). In 2017, he introduced his own Marijuana Justice Act to end federal marijuana prohibition and provide incentives for states to legalize, going further than other bills by attempting to correct some of the worst injustices of marijuana prohibition. And he’s one of the 10 Senators who are sponsoring the STATES Act, which is the main bipartisan vehicle for legalizing marijuana under the Trump Administration.

Booker’s term is not over until 2020, but it is unclear whether he will seek re-election since he is commonly discussed as a contender for the Democratic nomination for President. Whether he remains in the Senate or seeks the Presidency, it’s clear that Booker will run on a platform that includes marijuana legalization.

Senator Gardner and Senator Booker have a lot in common: they were elected to their first full terms in 2014, they’re both named Cory, and they’re leading their parties on marijuana reform. However, they approach the issue from very different perspectives. Booker strongly believes in marijuana legalization, with a focus on the racial and social injustices of prohibition. Gardner actually opposed marijuana legalization when it was being considered by Colorado voters in 2012, but after it was passed and implemented, he decided it was his responsibility to protect the will of his constituents from federal intervention. After Attorney General Jeff Sessions announced he was revoking the Cole Memo, Gardner led a blockade of DOJ nominees that ended with President Trump agreeing to support reform. To follow up on this commitment, Senator Gardner teamed with Senator Warren to introduce the STATES Act, which would let states make their own marijuana policies.

Gardner is not up for re-election until 2020. Being from a purple state like Colorado that has trended blue in recent years, Gardner could hardly afford to be seen as anti-legalization in a state with that continues to lead the nation on cannabis. His transformation on this issue may have been less about a change of heart and more about protecting his electoral future. Whatever the reason, we are thankful for his recent work and advocacy on this issue.

Senator Warren was first elected in 2012, and spoke in favor of the medical marijuana ballot initiative that was also being voted on in Massachusetts that year. The initiative passed, and Warren became a leader on medical marijuana policy in the Senate, advocating for cannabis as a way to help combat the opioid overdose crisis. And while she did not publicly endorse Massachusetts’ recreational marijuana initiative approved in 2016 (although she claimed to have done so after the fact), she did vote in favor of it. Since then, she has also led on legalizing marijuana for all adults, most notably as the lead Democratic sponsor of the STATES Act.

Warren is up for re-election this year, and faces a Republican opponent who has fought against marijuana reform in the state legislature. Thankfully, it doesn’t seem like we need to worry about losing this champion in 2018, since polls show her with a 26-point lead. But Warren might not finish that term, as she is also discussed as a contender for the 2020 presidential race.

As mentioned above, Merkley is the most senior senator who made it into our top five. He has been able to use this seniority, as well as his position as a member of the powerful Appropriations Committee, to fight for major changes to U.S. marijuana policy. He’s led the fight for his namesake Merkley Amendment, which would have blocked federal regulators from going after banks for working with marijuana businesses. While it has passed in committee multiple times, unfortunately the amendment has not yet made it into law. He also is a leader on the Daines/Merkley Amendment, which would allow doctors within the Department of Veterans Affairs to recommend medical marijuana in states where it is legal. No wonder NORML gave him an A.

Senator Merkley is not up for re-election until 2020.

Senator Paul, first elected in 2010, is the second-most senior member of our top five. Despite representing conservative Kentucky, which doesn’t even allow for the medical use of cannabis, Paul has a strong libertarian streak and has advocated for reform since long before it was popular. He’s following in the footsteps of his father Ron Paul, who for many years was the only Republican member of the House to sponsor marijuana reform legislation. Rand Paul was the lead Republican on the CARERS Act, and is now one of five Republicans sponsoring the STATES Act. Like Senator Gardner, Senator Paul’s party identification is particularly important while Republicans control both the Senate and the presidency.

Senator Paul is not up for re-election until 2020.

The lawmakers above deserve recognition as the five best in the Senate, but there are many others who have also done great work to advance the cause of marijuana legalization. We can’t list them all, but here are a few quick highlights:

Bernie Sanders (I-VT)
Senator Sanders is the only member to receive an A+ grade from NORML, and his advocacy during the 2016 presidential primary demonstrated the issue’s popularity among Democrats.
Patrick Leahy (D-VT)
Senator Leahy is the most senior member of the entire Senate, ranking member on the Appropriations Committee, and a member of the Judiciary Committee.
Steve Daines (R-MT)
Senator Daines serves on the Appropriations Committee, and is the lead Republican sponsor of the Daines/Merkley amendment.
Kirsten Gillibrand (D-NY)
Another potential Democratic Party 2020 nominee, Senator Gillibrand was the original sponsor of the CARERS Act with Senators Booker and Paul, and also joined as a sponsor of Booker’s Marijuana Justice Act.
Chuck Schumer (D-NY)
To be clear, the current Senate Minority Leader has not traditionally been a friend of marijuana reform. But he had a major change of heart this year, introducing the Marijuana Freedom and Opportunity Act to legalize marijuana at the federal level. A party leader introducing reform legislation earns a place on this list despite his past transgressions on this issue. Your move Mitch McConnell…