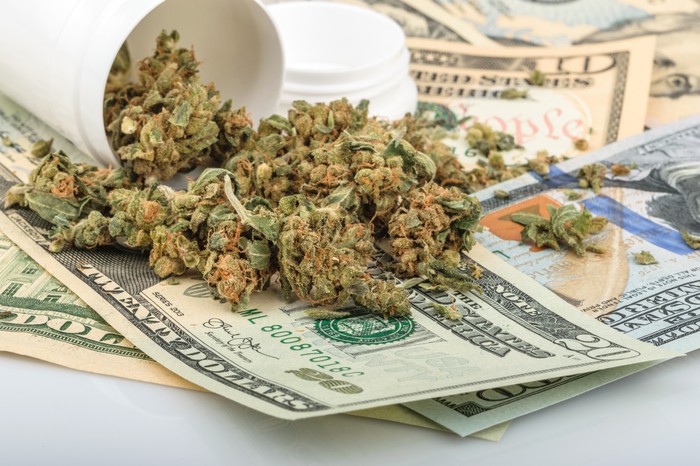 Whether you realize it or not, the cannabis industry had an incredible year in 2018. You might not think this was the case given the underperformance of many brand-name pot stocks, but the industry itself gained validation in a big way after Canada ended nine decades of recreational marijuana prohibition in October.

With cannabis now legal in Canada and a growing number of U.S. states and countries around the globe, attention now turns to just how big the global weed market could be. A new analysis from Arcview Market Research and BDS Analytics estimates that global cannabis sales will rise 38% in 2019 to $16.9 billion. That’s a lot of money — and Wall Street knows it.

Wall Street is exceptionally bullish on these five marijuana stocks
After running a screen on more than three dozen pot stocks, Wall Street expects all but two to head higher, as is indicated by a higher consensus price target than the current share price for these stocks. However, five pot stocks really stand out given that Wall Street’s consensus price target is, at minimum, double their current share price. Here are those five marijuana stocks, listed in ascending order.

Emerald Health Therapeutics: Consensus target price 109% higher
British Columbia-based Emerald Health Therapeutics (NASDAQOTH:EMHTF) is one grower that appears to have the fancy of Wall Street. Having formed a joint venture with Village Farms International known as Pure Sunfarms, the duo is retrofitting approximately 1.1 million square feet of vegetable-growing facilities for cannabis production. At full capacity, this facility should yield 75,000 kilograms a year. Combined with Emerald Health’s Metro Vancouver facility and its purchase of Agro-Biotech, it could top 100,000 kilograms of peak annual output.

In particular, Wall Street might like the potential for Pure Sunfarms to expand its existing capacity. There’s about 3.7 million square feet of adjacent land that the joint venture could utilize for expansion purposes.

Of course, Pure Sunfarms also has among the lowest output-to-square-footage yields among large growers, and it’s yet to generate any substantive amount of sales. Legalization should change that, but this investor isn’t sold on Emerald Health Therapeutics being worth more than double its current market cap.

MedMen Enterprises: Consensus target price 111% higher
U.S.-based vertically integrated dispensary operator MedMen Enterprises (NASDAQOTH:MMNFF) is also expected to see a healthy appreciation in its share price, per Wall Street. MedMen’s existing locations have produced higher sales per square foot than Apple stores, and the company is in the midst of the largest U.S. pot acquisition in history: a $682 million buyout of privately held PharmaCann. Assuming the deal is approved, it’ll add 18 new dispensary licenses, more than double the number of grow farms and/or processing facilities to 13 from 5, and double the number of states MedMen would have a presence in to a clean dozen.

While it’s pretty evident that MedMen is changing the cannabis-buying experience for a number of consumers in the U.S., it’ll be a while before it changes those big red marks in the loss column into profits. MedMen’s vision before the PharmaCann deal was to have 50 open stores by 2020 (it has just over a dozen right now), but opening these locations won’t be cheap. High administrative and general expenses should keep MedMen deep in the red, which may keep it from realizing Wall Street’s consensus price target.

Planet 13 Holdings: Consensus target price 135% higher
Continuing the theme of vertically integrated U.S. dispensaries, Planet 13 Holdings (NASDAQOTH:PLNHF), which makes its home in Nevada, is expected to see a serious uptick in its share price, according to Wall Street.

What makes Planet 13 so unique is that it launched the first phase of its first-ever cannabis superstore near the Las Vegas strip in November. This first phase opened 40,000 square feet to the public, with the end product eventually expanding to 120,000 square feet. Unlike most dispensaries that rely on repeat, loyal customers, Planet 13’s superstore will primarily lean on tourists, hoping to garner at least 2,000 visitors per day. Just as MedMen is changing the buying experience for repeat consumers, Planet 13 is creating a unique experience for tourists.

Of course, the big question is whether Planet 13 can translate these visits into bottom-line profits. The revenue should certainly be there, but the desire of dispensary operators to expand means very high costs in the interim. Planet 13 Holdings does offer a unique product, but it’s unclear if it’ll be able to deliver.

Additionally, TGOD is expected to devote 40,000 kilogram-equivalents of its annual production to its edibles and cannabis-infused beverage division. These alternative consumption options should be legalized in Canada by October at the latest. Edibles and infused beverages are a higher-margin product than dried cannabis flower, and they could be a dangling carrot that leads a brand-name beverage or snack partner to TGOD.

On the other hand, The Green Organic Dutchman is really late to the party in terms of generating its first sale, and it looks unlikely to generate a profit this year. Unless we begin to see the tangible results of TGOD’s expansion, hitting Wall Street’s lofty price target could prove challenging.

Rather than simply crank out as much cannabis as possible and find loyal buyers of the product later, Aleafia’s business model entails operating medical cannabis clinics under the Cabano brand name and creating loyal customers via its clinics.

Aleafia is also in the process of buying Emblem, another company with medical cannabis clinics and its own grow farms, for approximately $132 million. Assuming the deal gets the nod in all respects, it would create a company with nearly 60,000 patients and 40 medical clinics throughout Canada. More importantly, it would have a combined peak yield of 138,000 kilograms each year. That easily places it among the projected top 10 producers. While Wall Street’s lone price target is probably a bit too bullish, upside is certainly possible for this overlooked pot stock.

Learn more at The Motley Fool