Which States Made The Most Tax Revenue From Marijuana In 2018? 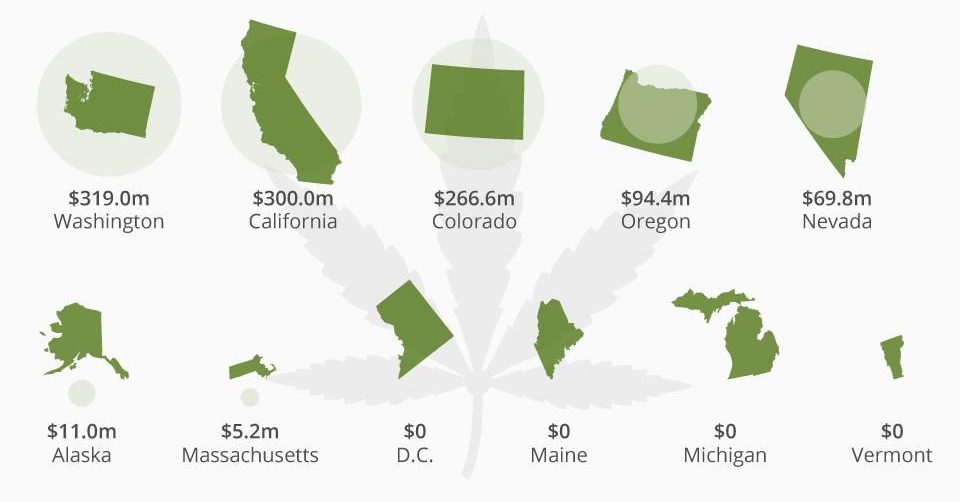 The legalization of marijuana in several U.S. states has brought numerous economic benefits and job creation is certainly one of the more noticeable ones. Even though the Bureau of Labor Statistics does not report on job gains within the industry due to marijuana’s legal status at federal level, a report from Leafly recently claimed that the number of direct and indirect jobs created through legalization grew to 300,000 last year. Another obvious economic benefit is of course tax revenue, something which was also highlighted in Leafly’s report.

Out of ten legal states (plus D.C.), seven currently tax and regulate revenue-producing stores. With those taxes typically 10 to 37% higher than local sales tax, it comes as little surprise that some states raked in hundreds of millions of dollars last year. Out of all states where recreational marijuana has been given the green light, Washington made the most in taxes last year with an estimated $319 million. California was close behind with $300 million while Colorado recorded the third-highest estimated tax revenue with $266 million.

What is all that money used for? Leafly said that it supports jobs in school construction, drug abuse programs and medical research, among other areas. Aurora in Colorado is a notable example of pot money put to good use with the municipality using $900,000 to open a space for individuals experiencing homelessness. The Aurora Day Resource Center was developed in an old police department gym and it is aimed to give homeless people a place to go during the day while providing access to basic services. Pueblo in Colorado was using marijuana tax revenue to fund scholarships for underprivileged students last year.

Which States Made The Most Tax Revenue From Marijuana In 2018?
marijuana finance