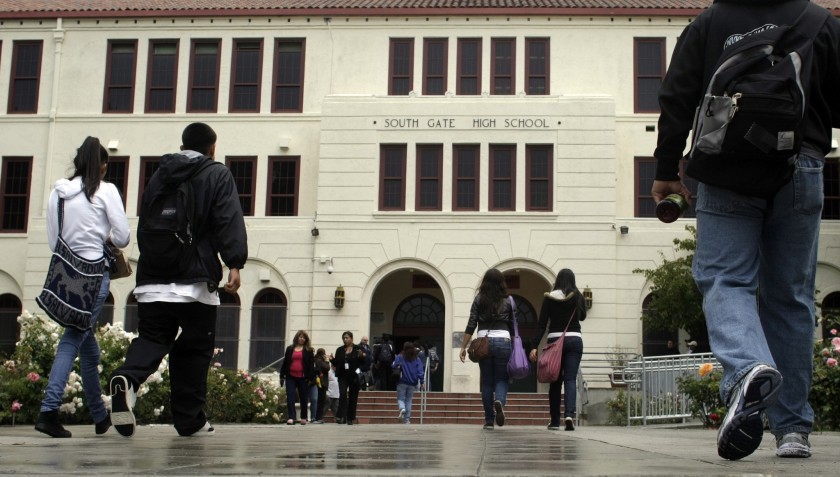 California moved a step closer Friday to allowing parents to bring some medical marijuana products to their children on school campuses, and now Gov. Gavin Newsom will be the final arbiter on an idea rejected by his predecessor.

The state Senate gave final legislative approval to a controversial bill that would authorize school districts to let parents bring nonsmoking medical cannabis products — including pills, creams and oils — onto school campuses to administer them to their children. They could only do so for children that had received a doctor’s recommendation for the medical marijuana.

State Sen. Jerry Hill (D-San Mateo) said his measure is needed to help students with severe health problems, including epilepsy, attend school without disruptions caused by parents otherwise taking them off campus to administer the drug. The bill was named for an epileptic teenager who lives in Hill’s district and depends on daily doses of cannabis oil.

“Jojo’s Act would enable students who are living with severe medical disabilities and rely on medicinal cannabis to take their medication on campus under strict conditions and supervision, so they can get on with their school day without disrupting their education,” Hill said Friday, noting the drug can be administered only in nonsmoking and nonvaping forms.

The measure, which applies to students in kindergarten through 12th grades, was opposed Friday by many Republican legislators as well as by the California Police Chiefs Assn., which wrote to lawmakers that the exemption could jeopardize student safety by opening the door for drugs on school campuses.

“One of law enforcement’s top priorities is to prevent any youth under the age of 21 from accessing all types of cannabis products,” the chiefs said in a statement. “While we understand some parents may choose to treat their student’s illnesses with cannabis, we are opposed to allowing parents or guardians administer the drug to their student while on school grounds.”

“Generally, I remain concerned about the exposure of marijuana on youth and am dubious of its use for youth for all ailments,” Brown wrote in his 2018 veto message. “This bill goes too far — further than some research has — to allow use of medical marijuana for youth. I think we should pause before going much further down this path.”

Unlike Brown, however, Newsom was a driving force behind legalization of marijuana in California as a leading proponent of Proposition 64, the 2016 initiative approved by voters that allowed licensed growing and sales. Like most governors, Newsom has been noncommittal about bills before they reach him.

“If and when the bill reaches the governor’s desk, it will be evaluated on its own merits,” said Jesse Melgar, a spokesman for Newsom.

Because marijuana is still an illegal drug under federal law, there are restrictions on research involving the use of cannabis and that has limited the available scientific evidence of its medicinal value to children, state officials said.

However, in a 2017 paper published in the journal Pediatrics, researchers examined existing studies and found evidence for therapeutic uses in the treatment of pediatric epilepsy and pediatric chemotherapy-induced nausea.

State officials also noted that the Food and Drug Administration has approved the use of CBD, a non-psychoactive chemical, under the trade name Epidiolex for the treatment of certain epileptic syndromes.

Those urging the governor to sign the measure include Karina Garcia, a San Bruno mother who must take her son, JoJo, off campus every day to administer a cannabis tincture that is used to control his rare form of epilepsy. Her son graduated from high school last year but is still taking classes.

She began providing the ingestible oil to her son after pharmaceutical drugs failed to effectively stop seizures, she said. “I was watching my son die right before my eyes,” she told a Senate panel during a recent hearing on the bill.

“It is not fair that this medicine that has saved my son’s life [would] not be given the same treatment as other pharmaceuticals on campus,” Garcia added. “My son’s life and so many others depend on it.”

Another parent told legislators that her son has missed 10% of class time — thousands of minutes — because state law currently requires her to take him at least 1,000 feet from his school to administer medical marijuana oil.

The measure is supported by the California School Boards Assn. “Every child is entitled to an uninterrupted education,” the association said in a letter to lawmakers. The group estimated the bill could have an impact on hundreds of students in the state.

Opponents of the California bill include Kevin Sabet, president of the anti-pot group Smart Approaches to Marijuana, who called it “another gift to Big Marijuana.”

“It’s rife for abuse,” Sabet said. He said that he is concerned students might “forge a note, and claim their high potency pot oil is ‘medical.’ “

Critics of California’s medical marijuana law that was in place for two decades before the passage of Proposition 64 complained that getting a doctor’s recommendation was easy for even relatively minor ailments, including a stiff neck and headaches.

“No one has ever been denied a recommendation,” said state Sen. Andreas Borgeas (R-Modesto), who along with all but a few Republicans opposed Hill’s measure. Borgeas said he is concerned that the definition of what constitutes a legitimate medical use in the bill is too broad and that students would be able to use cannabis with just a doctor’s recommendation rather than a prescription.

“I have a tough time with that,” Borgeas said during the hearing. “Anybody can get a recommendation.”

He asked why school nurses, rather than parents, couldn’t administer the cannabis medicine. Hill told him that school districts are concerned about losing federal funding if school employees provide students with what is still an illegal drug under federal law.

State Sen. Hannah-Beth Jackson (D-Santa Barbara), who supported the bill as chair of the Senate Judiciary Committee, said the federal government needs to change the law.

“Cannabis is now legal in California,” she said, adding marijuana “is not the boogeyman. It’s kind of shocking we look at it that way.”