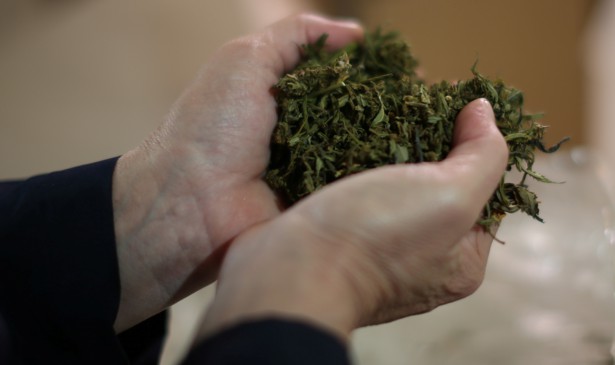 Hemp is currently a Schedule I federally controlled substance, in the same legal category as LSD, heroin, and Ecstasy. Like all forms of cannabis, it was criminalized in 1970, partially because Congress was worried that law enforcement couldn’t tell the difference between hemp and marijuana. “There was tremendous biological understanding of the difference, but Congress was not making policy based on this—they were basing it on fear,” said John Hudak, a senior fellow at the Brookings Institution and the author of Marijuana: A Short History.

Now, four years after universities and state agriculture departments were allowed to begin growing limited quantities of hemp for research purposes, Congress is expected in September to make the crop legal for Americans to grow for the first time in nearly 50 years. Legalization as part of the 2018 omnibus farm bill would be a major victory for American hemp producers, who believe hemp cultivation could become a billion dollar–plus industry, given hemp’s growing use in pharmaceuticals, food, and textiles. But legalization is just the first step in cultivating the American hemp industry, with many challenges ahead for farmers to ensure the viability of what is essentially a brand-new crop: establishing a supply chain, creating technologies for large-scale cultivation, and building markets both at home and abroad. These are daunting tasks for a crop whose prospects had been ruined for half a century by its association with marijuana.

Hemp and marijuana are both types of Cannabis sativa, but they’re bred differently, and have different biological attributes. Most importantly, hemp does not have psychoactive properties, because it has far lower levels of tetrahydrocannabinol (THC) than marijuana. The two plants look different, too—hemp stalks are long, thin, and fibrous, while marijuana grows closer to the ground.

Still, for decades after hemp was criminalized, Congress wouldn’t touch it with a 10-foot pole. “Everybody said, ‘That’ll never happen! Everybody thinks that it’s pot, and nobody’s going to support it,’” said Senator Ron Wyden, a Democrat from Oregon who started the legalization push back in 2012.

Hemp’s multitude of uses include food, lotion, and (perhaps most profitably) a recently approved epilepsy drug called Epidiolex made of cannabidiol (CBD), a cannabinoid that can be extracted from cannabis in both its marijuana and hemp forms. It’s legal to sell products made from hemp in the United States, but the market is currently filled almost entirely by imports from other countries.

Around the same time Wyden introduced his first bill to legalize hemp, Kentucky state officials started to consider the crop as an alternative for farmers struggling to make profits on tobacco, which has historically been the state’s top agricultural commodity but whose importance has declined in recent years. In 2012, James Comer, then Kentucky’s agricultural commissioner and now a first-term congressional representative, made legalizing hemp under state law his top priority. Legalization passed the Kentucky legislature with bipartisan support, but was stalled by the state’s attorney general because of hemp’s federal status.

So Kentucky’s hemp advocates turned their attention to Congress. Legalizing hemp, they argued, could give Kentucky farmers a chance to corner the market and help make up for some of the tobacco losses.

In 2013, after hearing from officials and advocates for several months, Senator Mitch McConnell of Kentucky, the Senate majority leader, jumped on board with the proposition. That year, a bipartisan coalition of the two Republican senators from Kentucky—McConnell and Rand Paul—and the two Democratic senators from Oregon—Wyden and Jeff Merkley—introduced the first version of the Industrial Hemp Farming Act, which would have removed hemp from the controlled-substances list and made it legal to grow as an agricultural commodity.

They weren’t successful, in large part because hemp’s continued association with pot made it too much of a political liability. But with the Senate’s top Republican publicly arguing that hemp wasn’t marijuana and shouldn’t be treated as such, members of both parties began to sign on to the Senate version of the bill.

At McConnell’s urging, the 2014 farm bill created the pilot research program that authorized universities and state departments of agriculture to grow and research hemp. Because hemp was still a controlled substance, there were many restrictions on its cultivation—farmers who wanted to participate in the program had to get a waiver from the Drug Enforcement Administration, and the number of acres farmers could legally plant was strictly limited. But, according to a congressional report, at least 19 states participated in the pilot program, and at least 40 have since passed legislation relating to the cultivation of industrial hemp. “I’m one of hemp’s biggest advocates, and I never expected it to go this fast,” said Jonathan Miller, a former Kentucky state official who is the general counsel, the spokesperson, and a registered lobbyist for the U.S. Hemp Roundtable.

So far, according to its proponents, this limited research endeavor has been a success. “Last year alone, the hemp pilot program yielded more than $16 million for Kentucky farmers,” McConnell wrote in an April op-ed. Geoff Whaling, the chairman of the National Hemp Association, said that American farmers can’t keep up with the growing U.S. demand for hemp, which is currently filled by imports from other countries such as Canada and China.

The most recent version of the legislation to legalize growing hemp was introduced in April, with McConnell as the primary sponsor. Though that version never made it to the House, McConnell eventually worked it into the Senate’s version of the farm bill. There’s no organized opposition, with the exception of a brief objection to the bill’s definition of hemp from Senator Chuck Grassley of Iowa, who nonetheless classifies himself as “pro-hemp.”

Despite all the hype surrounding hemp’s economic potential, nobody is really sure what to expect once it’s legalized. A recent congressional report noted that even in Kentucky, studies concluded that “short run employment opportunities evolving from a new Kentucky hemp industry appear limited.” It also cited a U.S. Department of Agriculture study that concluded with “uncertainty” about the long-term demand for hemp and the “potential for oversupply” in the U.S. market.

Then there’s the fact that hemp hasn’t been grown in the living memory of many, if not most, farmers in the United States. There’s simply not many people with experience growing the crop—a situation exacerbated by the bill itself. The farm bill’s language precludes people with drug-felony convictions from cultivating hemp, which means that many people with experience growing cannabis in the form of marijuana would be federally prohibited from growing its sister plant. Despite the relative success of the campaign to distinguish hemp from pot, it hasn’t been able to shake this relic of hemp’s history; Politico reported that the provision was added in early July to appease Grassley.

Though at least one advocacy group has condemned the ban on people with drug-felony convictions, backers have largely brushed aside criticism. Yet because drug-felony convictions disproportionately impact communities of color, the provision could serve to keep black, Latino, and Native American farmers out of the hemp market—much as similar laws at the state level have served to exclude them from the medical-marijuana industry.

“This amendment will force many African Americans, Native Americans, Hispanic/Latinos and others who have a state or federal drug felony convictions to shut down existing hemp operations and they will be unable to grow, process or own a hemp business in the future,” GrowHempColorado said in a statement. Federal agriculture policy has historically favored white farmers, both explicitly and implicitly, and bans like this could further this exclusion while providing another profitable crop for large-scale, mostly white farmers.

There’s also logistical questions to legalization. “If this legislation passes, its gonna cause quite a bit of chaos,” said Cory Sharp, a hemp farmer and the CEO of HempLogic, a company that consults with farmers who are considering entering the industry and is developing machinery to aid in processing hemp crops. He’s worried that, once hemp is legalized, farmers are going to jump in without understanding the complexities of the crop they’re getting into. And, he says, the infrastructure to properly process the amount of hemp that will hit the market once its legalized simply doesn’t exist yet. “Farmers are struggling right now, so they’re not thinking it all the way through,” he said.

Sharp also worries that farmers are all going to get into the type of hemp that seems most profitable on the surface—hemp grown for pharmaceutical drugs that use CBD—without considering all the red tape that comes along with that pursuit. “Hemp is three distinct disciplines. You have hemp made for food, made for fiber, and made for pharma,” he said. “Each one of those disciplines has a distinct, different way of growing and processing.” Farmers unfamiliar with the crop, he’s worried, might start growing without thinking about what market they want to sell their hemp to.
Though he’s much more optimistic about hemp’s future, Whaling, of the National Hemp Association, largely agrees about the challenges. “We need to be wise and be methodical about the steps that we take, because if we start to grow this product because people think that it’s new, it’s easy, it’s a panacea crop, it’s going to solve a lot of problems for farmers, and we don’t have the facilities in place to process it, then everyone will give up and it’ll fall flat on its face,” he said. “We need to go from zero to millions of acres of fiber, and the question is how we start to build that supply chain because the largest processing equipment for hemp today only processes 14,000 acres.”

Wyden argues that the pilot program has allowed states that took full advantage of it ample time to prepare for the crop’s full legalization. “That was the point of those extra years” of research, he said. “Certainly in states like Oregon and Kentucky, the fact that I introduced the bill in 2012, that we started making preparations for this day with the research and the pilot projects. We now have 400-plus farmers ready to go, so a fair amount of foresight has gone into this.”

In all likelihood, it’ll be clear soon enough if producers are prepared for the onslaught of hemp. Both McConnell and Comer are on the farm bill’s congressional conference committee, putting two of hemp’s biggest advocates in prime positions to advocate for its inclusion in the joint bill that is scheduled to be brought before both chambers by the end of September.

Congress Finally Can Tell Hemp From Pot
hemp vs pot