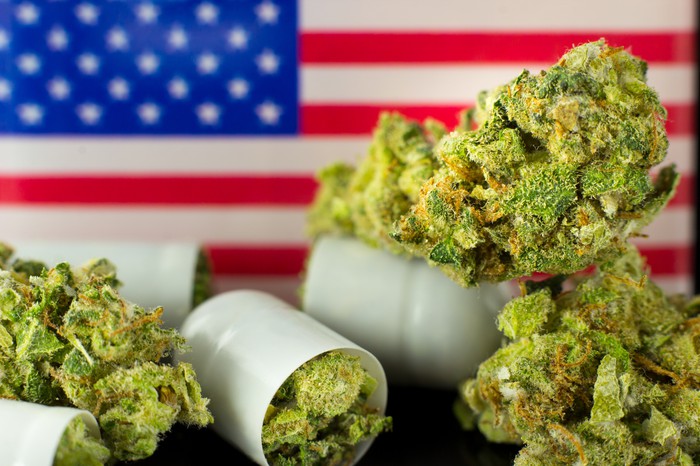 Following in the footsteps of its biggest Canadian competitor, Aurora Cannabis (NASDAQOTH:ACBFF) has officially filed to list its shares on the New York Stock Exchange (NYSE). The decision follows the listing of Canopy Growth’s (NYSE:CGC) shares on the NYSE in May, and it will offer more investors an opportunity to participate in the fast-growing marijuana market. Read on to find out why Aurora Cannabis’ decision to trade on a major U.S. stock exchange is important.

A little background
A $150 billion global market, marijuana sales are beginning to shift from black market transactions to transactions in government-regulated dispensaries and retail stores.

However, because marijuana remains a Schedule I controlled substance federally, U.S. marijuana market participants’ access to banking services and ability to claim tax deductions is limited. Those obstacles, along with an inability to transact business across state lines, has created a highly fragmented market. As a result, most U.S. marijuana companies trade on the thinly regulated over-the-counter market, rather than on a major market exchange like the NYSE.

The lack of investment options for investors on the major markets has been a problem for marijuana investors. They can accept the risk of buying and selling on the less-transparent over the counter market, or they turn to markets outside the U.S., such as Canada, where many marijuana companies have their primary listings. However, many investors can’t choose either of those options. For instance, institutional investors often have mandates that prevent them from holding over-the-counter or foreign stocks in their portfolios.

More liquidity and more money
Owned by the Intercontinental Exchange (NYSE:ICE), the New York Stock Exchange is the largest stock market exchange in the world. Founded in 1792, the exchange has a long-standing reputation for executing transactions reliably, and for this reason, over 2,400 companies list their shares on it.

By comparison, the Toronto Stock Exchange (TSE), which has been home to most Canadian cannabis stocks, is much smaller. The total market capitalization of all the stocks listed on the NYSE is over $23 trillion, but the combined market cap of all stocks listed on the TSE is about $3 trillion. The NYSE’s long history and size advantage makes it the gold standard of exchanges, so it’s trusted by market participants worldwide.

The potential to tap investors who are currently unable to become shareholders because of the company’s listing on the TSE prompted Canopy Growth to up-list its shares from the over-the-counter market in May. It similarly prompted Cronos (NASDAQ:CRON) to up-list from the over-the-counter market to the Nasdaq, and Tilray (NASDAQ:TLRY) to become the first major marijuana IPO on a U.S. exchange earlier this year. Since making their shares available on major U.S. stock exchanges, the market caps of all three companies have increased substantially, giving them greater flexibility to use their equity as currency in M&A or as a source of financing. 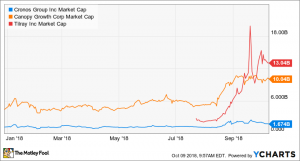 Aurora Cannabis comes to the NYSE
A nationwide marijuana marketplace has put Canada at the forefront of the movement to legalize marijuana, but Canada’s market opportunity is small when compared to the global opportunity. According to Deloitte, Canada’s marijuana sales could eclipse $6 billion Canadian in 2019 following the opening of the adult-use market on October 17. For comparison, the U.S. marijuana market is worth about $50 billion annually.

Capturing market share globally won’t be cheap, and that’s going to increase the need to access capital for everybody, including Aurora Cannabis.

Aurora Cannabis has already been actively acquiring competitors and investing in green houses and indoor facilities to increase marijuana production capacity, and as a result, the company could have 570,000 kilograms of production capacity as early as next year. Those investments are already paying off. Its sales were 16.1 million Canadian dollars in the third quarter and CA$19.1 in the fourth quarter, and for the full fiscal year, Aurora Cannabis revenue was CA$55.2 million, up 206% from one year ago.

It’s anyone’s guess if Aurora Cannabis’ listing in the U.S. will be as well received by investors as Canopy Growth and Tilray’s were, but if it is, then it could provide the company with the financial wherewithal to continue expanding its successful Canadian growth strategy to other countries as they legalize.

There’s no word yet on when trading will begin for Aurora Cannabis on the NYSE, but management is targeting by the end of October. If so, then investors will soon be able to buy shares in the U.S. under the company’s proposed ticker symbol, ACB.