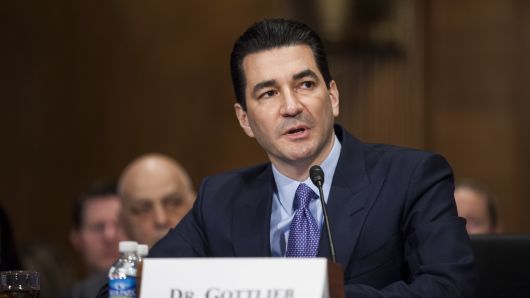 The Food and Drug Administration will hold its first public hearings on CBD in April as the agency weighs rules allowing companies to add the popular cannabis-based compound to food, Commissioner Scott Gottlieb said Wednesday.

“We’re deeply focused on this. We have taken on other hard challenges before,” Gottlieb told the House Appropriations Committee on Wednesday. “You have my commitment I’m focused on this one.”

Gottlieb said he has heard Congress “loud and clear” when it legalized hemp products, including CBD, in December and is putting together a working group of senior officials to work on the new rules. The FDA will kick off its rulemaking process with a public hearing in April, he said. However, Gottlieb warned the committee that it will not be a “straightforward” process.

CBD, short for cannabidiol, is a non-psychoactive compound found in the cannabis plant that promises to relax the body without altering the mind. While the federal government legalized CBD that’s derived from hemp, a close cousin of marijuana, the FDA’s rules still prohibit companies and restaurants from adding it to food or drinks.

Gottlieb floated what a possible framework might look like. He suggested high concentrations might be regulated as a drug that has more stringent oversight while lower concentrations could be categorized as food products that come with an easier review process.

He said the cannabis compound has possible therapeutic benefits and a regulatory process for pharmaceutical-grade CBD will give drugmakers more incentive to research and develop CBD-derived drugs.

“There is not a good proxy for us doing this through regulation, and if we get comments back and find this is sufficiently complicated for the agency, we will come back and have a conversation with Congress on with how we might be able to work together on this,” Gottlieb said. He added that Congress may need to intervene with additional legislation if the FDA thinks it will take two or more years to implement the rules.

Congress’ legalization of CBD derived from hemp was supposed to pave the way for a booming new industry. Although companies are technically prohibited from adding CBD to food, drinks and dietary supplements, many are doing it anyway.

There’s plenty of interest among consumer product companies, but the lack of clear regulation from the FDA has kept some big companies on the sidelines for now. And the CBD industry is begging for regulation.